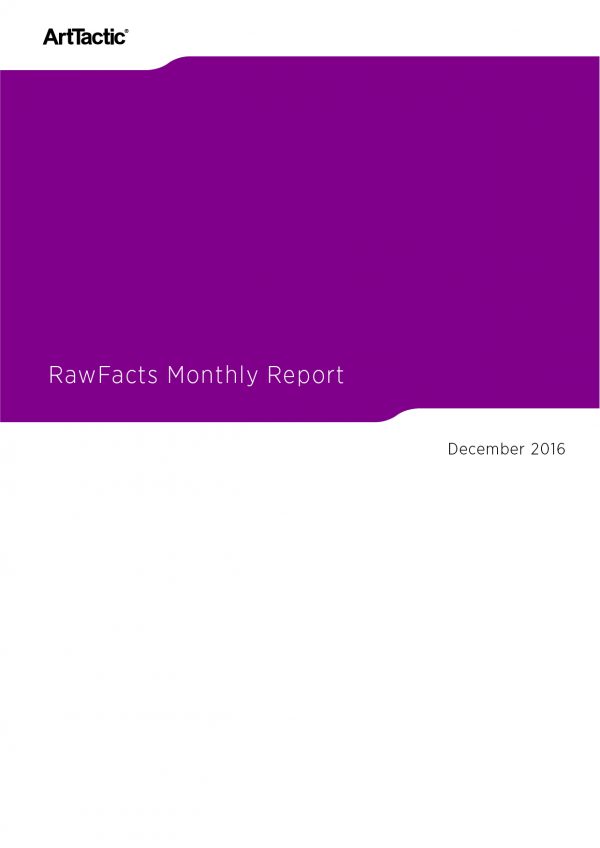 Auction Sales in December down 39.2% compared to last year.

RawFacts Monthly signals that December sales at Sotheby’s, Christie’s and Phillips were down 39.2% compared to 12 months ago. This follows a 24% decline in auction sales in November. Total auction sales last month amounted to $465.0 million (based on 9,733 lots sold) versus $765.0 million in December 2015 (based on 18,547 lots sold). Compared to December 2015, Christie’s reported a 45.0% decrease in auction sales, while Sotheby’s confirmed a 31.5% decline for the period. Phillips reported the biggest drop in December sales, with a 51.5% decrease in sales from the same period last year.

During December 2016, 75% of the auction sales came within or above their pre-sale estimates, suggesting that sellers’ and buyers’ expectations are increasingly falling in line. This result is down slightly from 80.2% in November.

The Jewels and Watches sector accounted for $113.1 million worth of sales in December 2016. The second biggest market this December was Old Master Paintings & Drawings with $63.4 million in reported sales, followed by Post-War % Contemporary Art, which raised $53.2 million in sales.

Auction sales in New York at Sotheby’s, Christie’s and Phillips accounted for 36.7% of total sales. This was ahead of London with 30.1%, and Paris with 27.5%. Paris sales were up 26% from last year with sales totalling $127.7 million for December.

RawFacts Monthly signals that December sales at Sotheby’s, Christie’s and Phillips were down 39.2% compared to 12 months ago. This follows a 24% decline in auction sales in November.