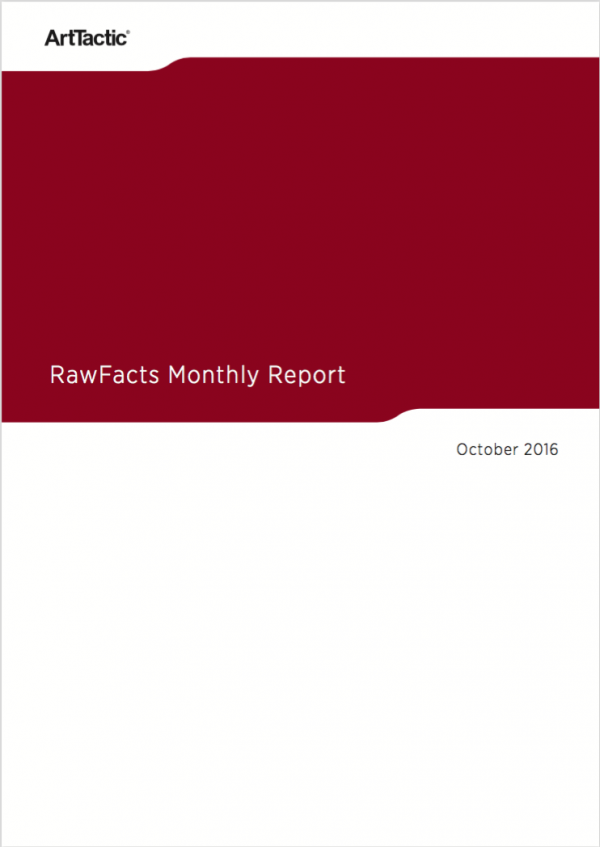 ArtTactic is delighted to launch the first RawFacts Monthly – a new regular auction barometer tracking monthly sales at Sotheby’s, Christie’s and Phillips. The report includes comparative auction analysis between the houses, year-on-year changes as well as sales trends within each auction house.  The report monitors all sales during a month, except from online-only sales.

Are we reaching the bottom of the market? RawFacts Monthly signals that October sales at Sotheby’s, Christie’s and Phillips were down 16.9% compared to 12 months ago. Total auction sales last month amounted to $751.6 million (based on 12,832 lots sold) versus $904.6 million in October 2015 (based on 13,300 lots sold). Christie’s reported a 29% decrease in auction sales, while Sotheby’s confirmed a 31% decline for the first 6 months of 2016. Although the auction market continues a negative trend from the first half 2016, the rate of decrease has slowed down.  This could signal that buyers’ confidence is returning.

Realistic pricing moves the market towards equilibrium. During October 2016, 77% of the auction sales came within or above their pre-sale estimates, suggesting that sellers’ and buyers’ expectations are increasingly falling in line.

RawFacts Monthly signals that October sales at Sotheby’s, Christie’s and Phillips were down 16.9% compared to 12 months ago.