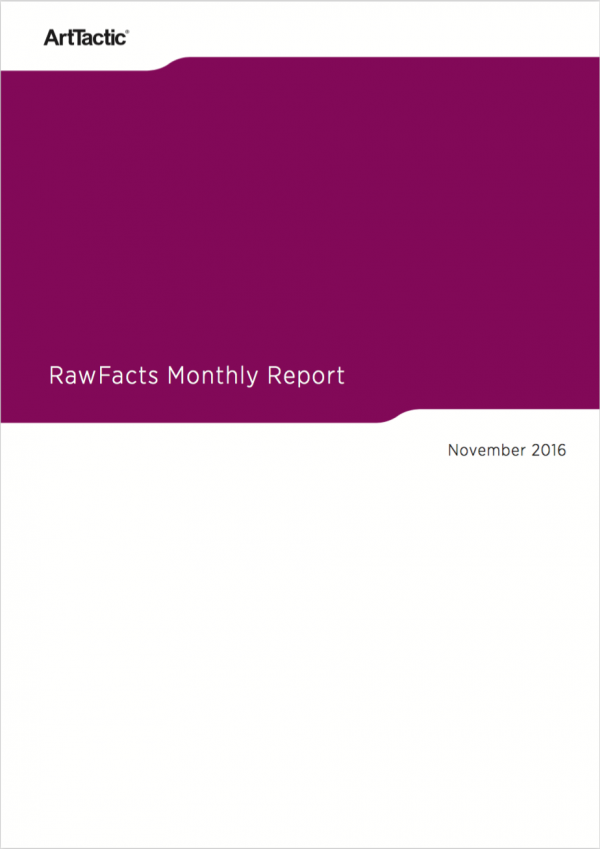 Auction Sales in November down 24.1% compared to last year.

RawFacts Monthly signals that November sales at Sotheby’s, Christie’s and Phillips were down 24.1% compared to 12 months ago. This follows a 16% decline in auction sales in October. Total auction sales last month amounted to $2.42 billion (based on 17,589 lots sold) versus $3.19 billion in November 2015 (based on 15,799 lots sold). Compared to November 2015, Christie’s reported a 20.2% decrease in auction sales, while Sotheby’s confirmed a 35.4% decline for the period. Although the auction market continues a negative trend from the first half 2016, Phillips reported positive numbers for November, with a 62.6% increase in sales from same period last year.

During November 2016, 80.2% of the auction sales came within or above their pre-sale estimates, suggesting that sellers’ and buyers’ expectations are increasingly falling in line. This result is up from 77% in October.

Post-War and Contemporary art accounted for $910.6 million worth of sales in November 2016. The second biggest market this November was Modern & Impressionist Art with $482 million in reported sales, followed by the Jewels & Watches sector, which raised $429.5 million in sales.

Auction sales in New York at Sotheby’s, Christie’s and Phillips accounted for 59.2% of total sales, ahead of Hong Kong with 15.3%, and London with 9.2%. Hong Kong sales were up 162.7% from last year with sales totalling $369.5 million for November.

While Christie’s and Sotheby’s is controlling the majority of the market, with a 51.4% and 40.2% market share respectively, Phillips is experiencing growth in terms of both market share and sales. Phillips market share for November was 8.5%, up from 4% for the same period last year.

RawFacts Monthly signals that November sales at Sotheby’s, Christie’s and Phillips were down 24.1% compared to 12 months ago. This follows a 16% decline in auction sales in October