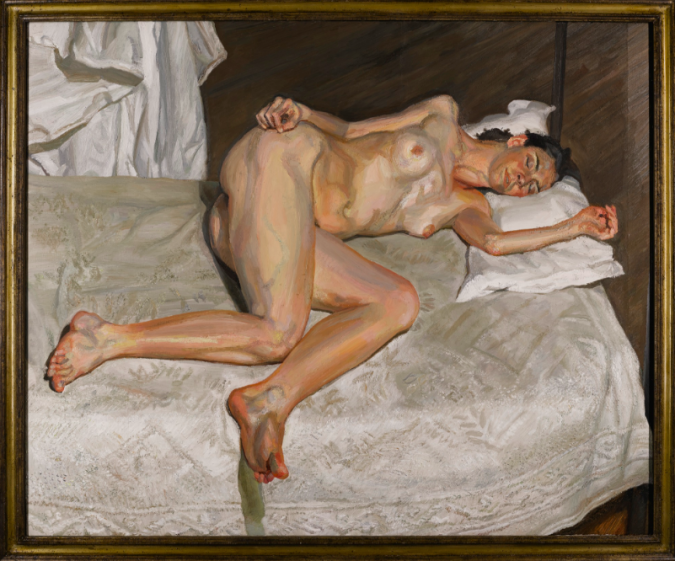 Lucian Freud’s Portrait On A White Cover (2002) sold at Sotheby’s London in the Post-War and Contemporary Evening auction on 26 June 2018. The painting was purchased for £19.7 million, excluding buyer’s premium. Image courtesy of Sotheby’s London.

The summer auction season in London can be a fickle friend, with most houses wondering if serious collectors are willing to make the pilgrimage to sweltering London amidst the height of tourist travel, or if any of the supply remains following major international art fairs. Christie’s certainty cast a shadow over the summer season last year with its decision to cancel the June Contemporary sale. Would other houses follow suit, or would they take full advantage of the absence of the industry’s heavyweight? With sales from June Contemporary auctions totaling £123.2 million between Sotheby’s and Phillips, the answer is, without a doubt, the latter. This signals an incredible 60% increase from 2017 for the two houses. Christie’s seems to be executing a slow but steady reversal by reinstating their summer Contemporary art calendar, introducing two day sales instead of the usual evening and day sale itinerary.

The star lot of the Contemporary sales was Lucian Freud’s ‘Portrait On A White Cover’, which sold for £19.7 million (excluding buyer’s premium) against the pre-sale estimate of £17 – 20 million. While not an international record for the artist, it does represent the most expensive painting by the artist sold in a London auction. Freud was 80 years old when he painted this portrait of Sophie Lawrence, an employee of Tate publishing, to whom he was introduced whilst preparing for his Tate retrospective in 2002. The second and third highest selling Contemporary lots were Jean-Michel Basquiat’s ‘Untitled’ and David Hockney’s ‘Double East Yorkshire’, selling for £12.8 million and £9.8 million respectively (exlcluding buyer’s premium).

Sotheby’s took more than 76% of the market share with a total of £94.2 million, while Phillips raised £27 million. Overall, both sales had incredible success, and out of 75 lots offered, only 1 work went unsold. Phillips managed to sell every single one of its 31 lots. There is no doubt that Sotheby’s and Christie’s have benefitted from Christie’s summer sale cancellation. So much so, that one can just imagine some of the Sotheby’s and Phillips employees writing to Christie’s, subtly suggesting that the auction house go ahead and cancel of its Fall and Winter sales as well. But in all seriousness – did Christie’s modified day sale, entitled ‘Post-War to Present’, make up for the loss of a June evening sale? In this sale Christie’s raised more than Phillips but less than Sotheby’s, with £10.4 million compared to Sotheby’s £12.1 million and Phillips £8.6 million (all excluding buyer’s premium). There is no doubt that all eyes will be on Christie’s for the Fall Contemporary sales.