Three Bacons Are Better than One

Three Bacons Are Better than One 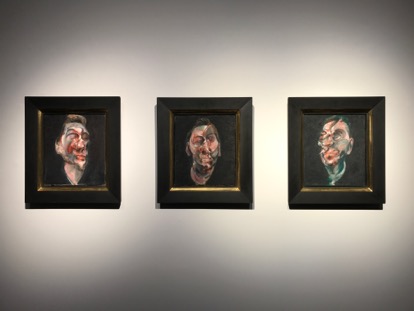 A triptych by Francis Bacon is being offered for sale in Sotheby’s upcoming Contemporary Art Evening Auction in New York on November 16. The work, Three Studies of George Dyer, painted in 1966, is estimated to sell in the region of $35 million to $45 million. Unlike the infamously unsold Bacon offered at Christie’s in London last month, this work carries a financial guarantee.

George Dyer was an incredibly important figure in Bacon’s life, and in his art. Dyer was more than just a model; he was Bacon’s lover and his artistic muse. In fact, Bacon would paint Dyer more than 40 times over the course of his career. Only 5 of them, however, are triptychs. Of the 5 works, 2 of these triptychs are held by museums. For these reasons, Three Studies of George Dyer is extremely rare to the market. The upcoming November Sotheby’s auction is the first time in over 50 years that the work has been exhibited to the public.

Overall, Bacon’s international art market overall has boomed in recent years, and his work has achieved record-breaking prices at auction. However, when considering the potential success of a single work at auction, it is crucial to examine similar works by the artist in the past. Earlier this year, Christie’s sold one of the other two available triptychs depicting Dyer in a New York evening sale of post-war and contemporary art. The work fetched a hammer price of $46 million, against a pre-sale estimate that was undisclosed but repeatedly reported to be in the region of $50 million to $70 million.

The two triptychs possess a similar set of characteristics. The sitter in both works is George Dyer. Both have the same black background colour, and both works are painted on the same size canvases. Both were painted in the 1960s, only a couple of years apart – the upcoming Sotheby’s work dates from 1966, while the triptych sold by Christie’s in May is from 1963. Could this miniscule difference in the work’s creation date have an impact on the final price that it will achieve next week?

The first element of these works to consider is the subject matter. Portraits are undoubtedly the most important part of Bacon’s production, especially when depicting a known sitter. Portraits (excluding Bacon’s self-portraits) account for 50.6% of global sales and 37.3% of the number of lots brought to auction since 2000.

Even the identity of the sitter can have a large impact on the price achieved at auction. The most important sitters are Lucian Freud and George Dyer. Portraits depicting his fellow painter Lucian Freud reach an average price of $45.2 million; this figure is however skewed by a triptych of Freud that broke a world auction record in 2013, when it was hammered down at $127 million in New York.

Meanwhile, portraits of Dyer reach an average price of $33.3 million and account for a total of $233.3 million in sales between 2000 and 2017 (ytd November 10, 2017), making him the most sought after sitter. In an expert survey conducted by ArtTactic in 2016, the most favoured sitters in a Bacon work were Lucian Freud and the Popes, followed by Henrietta Moraes in third and George Dyer in fourth places.

A second important element to consider is the size and number of canvases. Triptychs are the most favoured format in Bacon’s oeuvre for international collectors and museums alike. Since 2000, the artist’s triptychs have made up 36.2% of the market by value, while accounting for just 18.4% of sold lots. The average price of a triptych is $29.5 million, nearly three times as much as the average diptych or single canvas work.

While these are the main elements to consider when assigning an estimate to a work by Bacon, there can often be unpredictable factors. Bacon’s works are not always a success story when offered at auction, something the trade witnessed last month when Study of a Red Pope 1962, 2nd version 1971, another rare masterpiece by the artist, failed to sell at Christie’s evening sale in London. The painting possessed many of the qualities necessary for a Bacon to succeed on the auction block, including an impeccable provenance, and the 1971 study depicted both an image of George Dyer and a pope. Yet, it failed to sell.

The aggressive estimate of $78 to $104 million (£60-£80 million) for Study of a Red Pope 1962, 2nd version 1971 is what ultimately lead to its downfall at auction. While Bacon’s market is both stable and successful, this failure reminds the art world that overconfidence can be deadly in the art market.