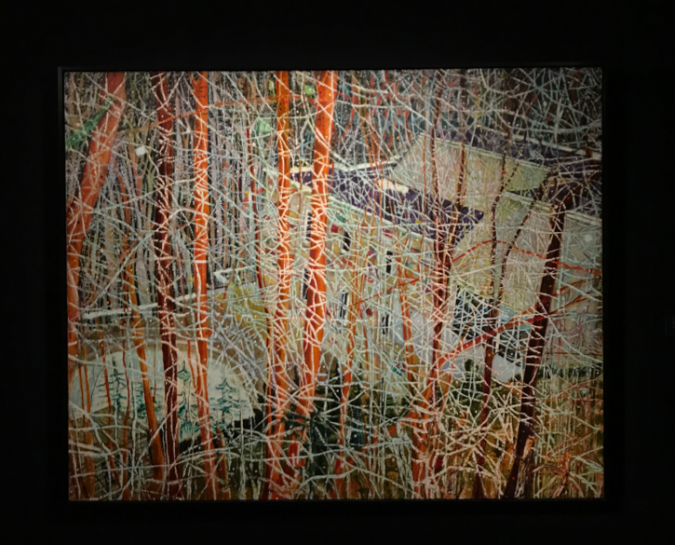 Peter Doig’s The Architect’s Home in the Ravine (1991) was the second highest earning lot of the London sales, selling at Sotheby’s for a hammer price of £13.2 million.

“While these third-party guarantees reduce the risk for auction houses, it also means that their profit is diminishing.”

The week before last saw the highest sales total for a Post-War and Contemporary sale in London ever recorded, with a combined total of £243.7 million (excluding buyer’s premium) divided between Sotheby’s, Christie’s and Phillips. This represents a more than 25% increase from the Post-War and Contemporary sales from March of last year, and a whopping 93% increase from the London sales held two years ago in February 2016.

The work that fetched the highest price at auction was Andy Warhol’s Six Self Portraits (1986) which sold at a hammer price of £19.9 million at Christie’s. The second spot goes to Peter Doig’s The Architect’s Home in the Ravine (1991), selling at Sotheby’s for a hammer price of £13.2 million.  While Warhol’s self-portraits may have stolen the show, two other Warhol pieces, Birth of Venus (After Botticelli) and Diamond Dust Shoes (Pink) went unsold from Christie’s and Phillips respectively, and were bought in for about 20% below their low estimates.

The astounding increase in total revenue for the Post-War and Contemporary sales in London was caused by a combination of an increase in lots offered by the houses and an upsurge in the average price of each work sold, with the average lot price climbing from £1.4 million to £1.6 million in the last year. How did the auction houses manage to secure such a high number of expensive lots this year? The answer is undeniably linked to the increasing number of guarantees that the auction houses are willing to offer.

Auction guarantees have been on the rise in recent years, and in the past year alone guarantees have risen by more than 75% in Post-War and Contemporary London sales. Christie’s guaranteed 20% of the lots in the sale, while Sotheby’s guaranteed 34.5%, and Phillips 34.1%. Despite having the lowest percentage of guarantees, Christie’s had the highest total value of its guaranteed lots (based on the low estimate). Overall, the total hammer value of lots secured by guarantees came to £126.2 million.

While guarantees are a useful tool for auction houses to gain more business, it can be quite a risky strategy. The scarcity of the contemporary art market means that auction houses often have no choice but to take the bait when wealth clients with expensive art play the houses against each other in order to maximize their profit and minimize risk. ArtTactic’s Head of Research, Peter Gerdman, warns that, “while the success of the record-breaking evening sales of post-war and contemporary art in London and New York is heavily reliant on guarantees, and particularly third-party guarantees, it doesn’t necessarily mean that it is a profitable game for the auction houses. While these third-party guarantees reduce the risk for auction houses, it also means that their profit is diminishing. This may be why we are now starting to see more guarantees finding their way into the Day sales of post-war and contemporary art.”

In fact, in the most recent round of auctions in London this March, a total of 9 lots across Christie’s, Sotheby’s and Phillips day sales carried guarantees. This only represented 1.9% of sold lots and 5.5% of the total hammer value, but it could be an indication of where the auction houses are hoping to make a profit out of in-house guarantees. Gerdman concludes: “Financial guarantees have become an integral part to the way the top end of how the auction market functions today. It will be interesting to see what role guarantees might play in the day sales moving forward. Could this be where the big auction houses are hoping to increase their power and profit?”

To read more about the results of the Post-War and Contemporary sales in London, consult ArtTactic’s latest reports on the Evening Sales and the Day Sales.