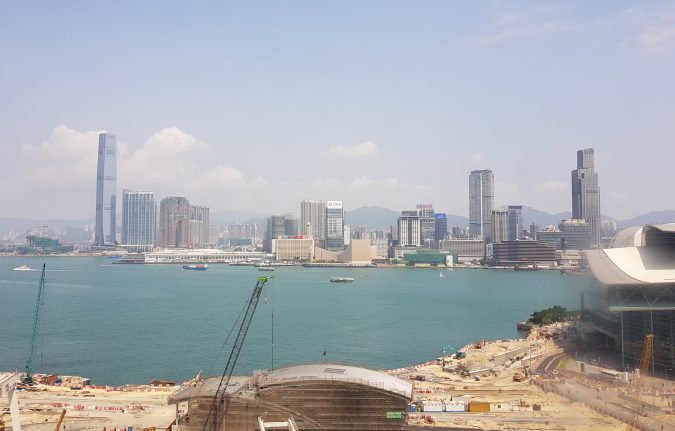 Art Basel Hong Kong 2018 wrapped up its 6th edition this weekend. From 27th to 31st March, a total of 248 galleries from the Americas, Europe and Asia exhibited a selection of 20th and 21st century works at the Hong Kong Convention & Exhibition Centre. The incredible views of Hong Kong skyscrapers, surrounded by by clusters of bare construction sites and decorated with massive LED screens, gave visitors an idea of the sheer scale and global visibility of both the city, and the fair itself.

The Asian leg of the trifecta of Art Basel fairs, Art Basel Hong Kong 2018 felt markedly busier, more cosmopolitan, and more concentrated with savvy collectors than any other art fair in Asia…and perhaps the West too. Notable sales were being reported moments into the fair opening, and among them was Willem de Kooning’s Untitled XII (1975) sold at Levy Gorvy for $35 million. With an estimated 80,000 visitors in 2017 and a larger number this year, Hong Kong has further cemented its place as a mainstay in the art market calendar.

The fair featured quite a high number of regional galleries from South and South-East Asia. These regionally significant galleries made an arguably stronger show in Hong Kong than they did in art fairs closer to home this year – such as at the recent India Art Fair 2018 in February and at Art Stage Singapore 2018 in January. Intuitively, this can be attributed to what galleries, artists, critics, curators and art world professionals know about the behaviour of serious collectors of contemporary art – that they are unlikely to miss the buffet of art world experiences and works that are available during Art Basel Hong Kong. This includes access to lounges, VIP tours, private dinners and parties, but most importantly the chance to see a multitude of talented artists’ works in a single visit. From an art business perspective, it is not surprising that galleries reserve their strongest art works and booth designs for Hong Kong.

Overall, the fair placed great importance on regional representation, with half of the participating exhibitors in the 6th edition have spaces in Asia and Asia-Pacific. When collectors from outside the region take note of galleries native to Asia and Asia-Pacific, their art world circles are more likely to be drawn to the activities of the relevant region as birthplaces of exciting contemporary art. As long as South and South-East Asian galleries continue to invest in their regional art fairs, alongside flexing their muscles on the global stage of Art Basel Hong Kong, there can be a win-win situation and greater sustainability for these players in the art ecosystem.

Top galleries have recently launched new spaces in Hong Kong; David Zwirner had a grand opening on 27th January 2018, and both Hauser & Wirth and Pace inaugurated their new spaces on the week of Art Basel Hong Kong on 26th March 2018. The arrival of these top galleries places Hong Kong a step ahead in the bid to be the Asia-Pacific hub of the global art market.

The growing gallery scene in Hong Kong is coupled by a burgeoning institutional presence, making it unique when compared to other cities in Asia or Asia Pacific. The M+ Museum and the West Kowloon Cultural District, opening in 2019, is poised to be an important home for world-class contemporary art in the region. There is also the slightly less clear agenda of the Tai Kwun Centre for Heritage & Arts development, located within Hong Kong’s Central Police Station, which is planned to open in 2 months. 16 buildings with significant heritage value will be restored and opened as a shared space for contemporary art. It may still be early days, but there seems to be a shift in confidence from the numerous private museums that have mushroom-ed in China, or other national museums in the region, to these ongoing projects in Hong Kong to be able to attract a global audience to Asia-Pacific.

A topic that seems to be a cause of concern for galleries exhibiting at the fair is the idea that capital controls in mainland China could be hampering the art market in Hong Kong. China remains as a country with a ‘closed’ capital account – individuals, businesses and financial bodies can only move  money across its borders in accordance with strict rules that do not favour the international art market.

Whether this concern will transform into a deterrent for collectors is yet to be known, and there is no clear figure that reflects the extent to which Chinese capital regulations have hurt the art trade. However, it is worth noting that Hong Kong is markedly different from other Chinese cities such as Shanghai or Beijing. Hong Kong is a culturally matured ‘global’ city, and has become adept at organically importing cultures without compromising its existing cultural integrity. For these reasons, the new galleries opening up in Hong Kong are sure to see the city become a top destination for art lovers all year round.

Mansi Singh is a freelance art market writer and lives and works in Singapore.