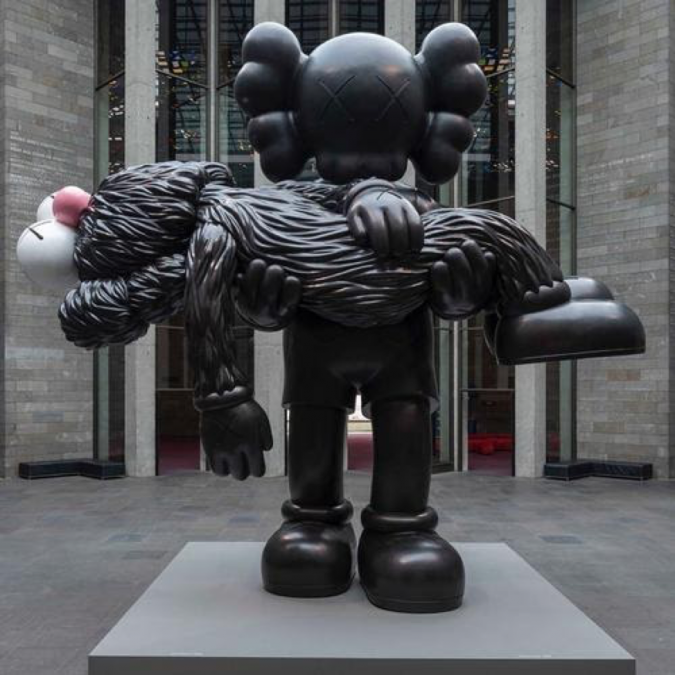 KAWS. The moniker hardly needs an introduction now that Brian Donnelly’s international fame and loyal fan base, of both collectibles and blue-chip collectors alike, has been developing since the 1990s and a topic of conversation in the public eye of mass media for a decade. The Jersey City native is the latest to be featured by ArtTactic in KAWS: Artist Market Report in continuation from our series of artist focused reports on market movers, which include extensive in-depth summative reviews of curatorial histories, analysis of public and private avenues including brand collaborations, market performance analytics and additional proprietary evaluations. Mentioned in the UBS Art Market Report 2020 with a total yearly market of $108 million in 2019 (including buyer’s premium), Donnelly’s momentous market growth was a significant contribution to the youngest segment of the Post-War and Contemporary Market; 23% of the total volume consisting of works made within the last 20 years. Whether chosen solely for its illustrative allure or as a reverse of “S.W.A.K.”, an early twentieth century phrase meaning “Sealed with a Kiss” and recycled by SoCal’s Raymond Pettibon, the four letters of KAWS may very well be engraved into the annals of art history for perpetuity.

One of the early dominoes that set this phenomena in motion was Donnelly’s omnipresent COMPANION, produced in a limited first edition of 1,500 toys with the Japanese streetwear brand Bounty Hunter in 1999. Plainly explained as an altered Mickey Mouse with KAWS’ signature skull and crossbone head and X-ed out eyes (developed from his graffiti days vandalizing Calvin Klein ads in NYC, and metaphorically described as the main protagonist of lonely and weary innocent dreams in his cast of recurring character motifs) COMPANION has grown with the acceleration of the artist’s career, figuratively and literally. From 7.75 inches in 1999 to a 121-foot long inflatable that has traveled the world and made headlines at CNN and TIME Magazine when it was installed in Hong Kong’s Victoria Harbor in 2019, the 21-year-old COMPANION has now graduated to AR (Augmented Reality).

The recent global launch of KAWS’ collaboration with Acute Art saw COMPANION (EXPANDED HOLIDAY), a two week long exhibition taking place simultaneously in twelve major cities across the world featuring a large-scale AR COMPANION floating in the clouds. Originally from March 12th to March 26th, the exhibition has been extended, except in Doha and Melbourne, with the New York location switched from Times Square to the Brooklyn Museum. In London, it can be viewed through the Acute Art app hovering over the Thames by Millenium Bridge.

Acute Art is widely referenced as a VR and AR Production House, however it’s actual leverage is well beyond a technical assist. With a fresh history of working with artists such as Marina Abramović, Olafur Eliasson, Cao Fei, Jeff Koons and Antony Gormley, Acute Art is not just a gateway to other realities, it is a platform where collectors can purchase limited editions at timely drops, trade, sell, share and swap. This massive global display of KAWS across continents is an acquisition call to collectors at all tiers. From $6.99 a day for a time-based acquisition of one sculpture to $10,000 to own COMPANION (EXPANDED), a 1.8 meter AR Sculpture part of an edition of 25 plus five artist proofs. The latest AR drops have been in concert with his album art collaboration with American rapper and musician Travis Scott, whose new single with Kid Cudi ‘THE SCOTTS’ has been deemed the top stream in 2020 on Spotify. With this pairing of Acute Art and KAWS, not to mention ‘THE SCOTTS’ vinyl on its third and final release, democratization of art has squarely hit a new level.

Aside from this major campaign, KAWS has also been active during the current pandemic, selling limited edition shaped prints through his Instagram @kaws aimed at his 2.9 million fan following. In order to acquire the prints, priced at $1,200 and editioned at 25 plus five artist proofs, interested parties must request by email. The effort to directly help the following charities went underway from April 10th to the 17th: FreeArtsNYC, Henry Street Settlement, Food Bank NYC, Jersey City COVID-19 Relief Fund, and the Maimonides Medical Hospital in Brooklyn.

Our data dive into the world of KAWS shows a healthy international following, with 40% of auction value achieved in Hong Kong over the complete span of Donnelly’s secondary market appearances, from 2008 to present date. With an increase in total market value from 2018 to 2019 of 238%, last year’s sales outperformed pre-sale mid-estimate values by 40%. This surge in demand has resulted in a 200% average price increase for repeat sales, with the highest return set at 396% for Untitled (Kimpsons 6 Package Painting Series), a paradox of a sixteen inch square painting that has been packaged in plastic with a cardboard backing. More insights from the Repeat Sale Analysis can be found within the report, along with details regarding price segmentation, sell-through rate, career to market contexts, full market breakdowns of paintings, prints and sculpture, and more.

To elaborate on the remarkable year that KAWS’ work experienced at auction, nine of the top ten records were achieved in 2019. These paintings range across motifs and themes, as many of his characters hit blue chip status. At number four is In the Woods (2002), a triptych featuring the artist’s rendition of Disney’s Snow White among her forest friends, which sold for $3.2 million at Christie’s last May. The Walk Home (2012) shows KAWS’ Spongebob riff with arms raised in alarm and sold the same week at Phillips, generating just under $6 million on an estimate of $600,000 to $800,000, achieving 8.5 times the mid-estimate. The largest canvas from the artist’s KIMPSONS series, Untitled (Kimpsons #1) (2004) sold this past October for $6.2 million, and at the top is another KIMPSONS work, The KAWS Album (2005), which sold in April of 2019 for $12.7 million at Sotheby’s in Hong Kong.

The overwhelming stratifications of KAWS’ audience and price segments in relation to his mass popularity is not the normal triple threat that the art world is used to handling, and in many instances exerting a modicum of control over. While KAWS has now been exclusively represented by Skarstedt for almost a year, after working with Perrotin since 2008 and joint representation for a year and a half, his work has not yet been greeted with gusto at every level of curatorial acclaim, but that may soon be changing with a major museum survey ongoing at the National Gallery of Victoria, and a substantial exhibition at the Brooklyn Museum planned for 2021.

Controversy surrounding the high prices at auction that collectors were willing to pay spiked in the media around the time of the record $12.7 million sale, and certainly in the wake of it. In late March of last year, Artnet’s feature on KAWS breaking the rules cited advisor Josh Baer of The Baer Faxt as skeptical of KAWS’ lasting power, questioning the true cultural depth and significance that the artist’s work will retain in a twenty-year hindsight. Then spurred by the April 1st sale, The Art Newspaper’s Anny Shaw remarked on the superficial nature of the work in her opinion piece “Why KAWS is not a great artist”, calling it “sheer conceptual bankruptcy”.

The following month, a special editorial in The New York Times featured the artist and his rocket trajectory. In the article, Donnelly is aware of the art world’s scrutiny of his meteoric rise from “bottom to top”, and Anne Pasternak, Director of the Brooklyn Museum shed some light on the decision to give the artist a major survey in 2021. Picked up by Artnet, ArtCritique and making a later appearance in the South China Morning Post, Pasternak’s insight is as follows:

“It makes the art world uncomfortable,” said Anne Pasternak, the director of the Brooklyn Museum. “But Brian doesn’t respect those traditional hierarchies.” Ms. Pasternak took time to come around, too. “I didn’t see the appeal initially,” she said of his work. “But artists love him. They all said, ‘Go visit him. ’And I’ve learned to listen to artists.” (From The New York Times, XX Marks the Spot: KAWS Goes Global)

And so, it’s possible that the tables have now turned with William S. Smith, Editor of Art in America, taking a stand last September with his in-depth critique that perhaps puts the one-off cursory comments to shame in “What the Rise of KAWS Says About the Art World’s Ailments”. Addressing the heart of Donnelly’s quest for universal relatability and familiarity as a way to connect as well as the varied cultural ties in the artist’s aesthetic and business getting, Smith writes that the preoccupation with death and loneliness doesn’t discriminate across demographics and sympathizes with the human condition. His words, “If the art world gatekeepers dismiss these objects out of hand, they risk missing in the image of weakness a moment of self-recognition,” seem to cut through the noise and grant fresh eyes to a club that never stopped looking for the next hoop that KAWS will need to jump through.

The controversy itself may signal KAWS’ success just as well as the climbing auction prices. It is the nature of our credo that movements overtake their predecessors by offering innovative answers to the dictating question ‘What is Art?’ in light of the new and changing forces that will define the zeitgeist of tomorrow. It is more likely that Donnelly has slipped under this radar for so long because rather than part of a neat group that can be classified by historians as a “School”, the ubiquitous movement of KAWS has been made on the ground and at the individual level, a phenomena that may become increasingly more apparent in our time.

With a title that is more pertinent than ever, KAWS: Companionship in the Age of Loneliness is the September 20, 2019 – April 13, 2020 survey which is now virtually accessible on The National Gallery of Victoria’s website. The exhibition of over 100 works features the vast range of Donnelly’s productivity over the years and also prominently announces the largest bronze sculpture that KAWS has ever created, a massive commission titled GONE that is situated in the inner courtyard and was assembled from twelve pieces over five days, reaching a height of nearly twenty-three feet tall and weighing fourteen tons. The monument is, of course, none other than COMPANION, holding a lifeless muppet in its arms that the artist calls “BFF”.

Despite the rounded cartoonish nature of the KAWS aesthetic, like many of the artist’s works it is a dark scene. COMPANION stands resolutely solid and in control, with the same sense of assuredness and carrying-on seen in one of the preeminent early COMPANION sculptures, COMPANION (Clean Slate), which sold in November of 2018 at Phillips for a hammer price of $1.65 million. With one foot almost always in mid-step, it is a message grounded in reality that moving forward is moving on, and that we may need to carry each other to make it through.