An Introduction to Restitution

An Introduction to Restitution 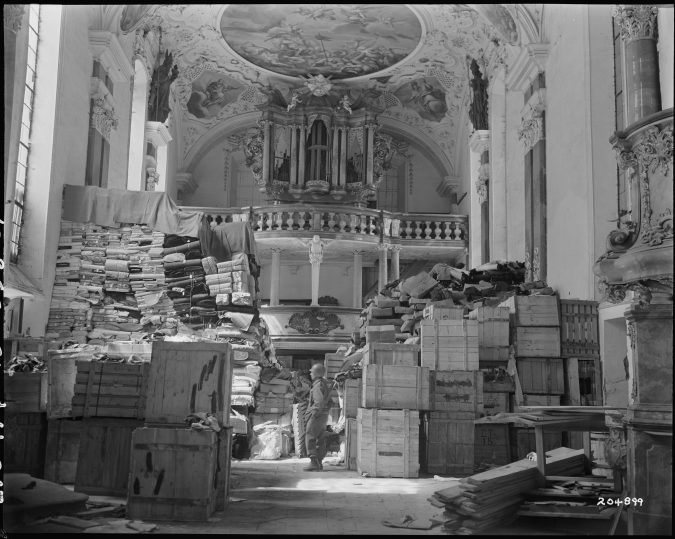 Troops find loot hidden in church German loot stored in church at Ellingen, Germany found by troops of the U.S. Third Army on April 24 1945. Courtesy of the National Archives and Records Administration.

“…the restitution of art objects is a relatively new and mostly unregulated field, which only started to gain relevance and traction in the early 1990s.”

The principle of restitution is this: to return an object[1], artifact or collectible to its rightful owner, in most cases their heir, whether they are an individual, family, museum, state collection or national government. Other terms often quoted alongside restitution are those of return, restoration, or recovery. The major fields through which restitution has become the main tool of resolution in the modern day art market are those regarding Nazi Looted Art, objects taken during colonial times, and those looted during war or violent occupation. In each of these occasions, one is dealing with an object displaced and taken out of its original context through war, looting, forceful taking or often (like in the case of national socialism) a governmental infrastructure of retrospectively ‘legal’ taking.

Recent Hollywood dramatizations of restitution cases are narratives internationally known such as ‘The Woman in Gold’ (2015), a depiction of the claims story of Maria Altmann and her aunt’s former possession of Gustave Klimt’s Portrait of Adele Bloch-Bauer I, and ‘The Monuments Men’ (2014), George Clooney’s popular representation of World War II allied efforts to return Nazi looted artifacts. Despite the subject’s recent popularity in the mainstream media, the restitution of art objects is a relatively new, mostly unregulated field, which only started to gain relevance and traction in the early 1990s. The international establishment of the Washington Principles (1998) and Terezin Declaration (2009) as soft law instruments that generate a moral pleading on the international market seem to have been mostly aimed at larger cultural institutions. These international efforts regarding restitution are guidelines for Nation States on the return of Holocaust era assets, aka, property restitution.

Yet the reality of restitution as initially defined has in the last decade resulted in a number of very lengthy and exhaustive cases, which are often more stark and less intriguing than those more popular stories reported on by the international press. There are still many more works missing and displaced, or that have large gaps in their provenance and ownership history, than have been restituted, rectified, or have had their chain of ownership fulfilled. This is due to a variety of legal, economic, political and cultural elements. Friction often occurs between the different international parties involved in the case, which could be working both in the public and private spheres, all the while juggling the importance of the international moral ‘good’ and each nation state’s legal rules (or lack thereof) which are in existence. The reality of restitution is that it has rarely lead to the direct physical restitution of the object to the original heirs, nor a rectification of its truthful history.

Matters become more complicated when one realizes that restitution decisions are made up out of a number of elements with the burden of proof mostly placed on the claimants. Major questions to consider are: Were the artworks in question in the possession of the original owners at the time of the taking? Were they forcefully taken, and if so, by whom?  Are the heirs the rightful ones? What research/due diligence has the current owner of the art object fulfilled before purchasing the work? Could the purchaser have known, within their due diligence, that this was a looted item? This high level of due diligence (or within their ability of knowing) is constantly rising and becoming more difficult to fulfill within the court of law. Legally, the responsibility of due diligence falls upon the buyer.

More recently there have been a higher number of more specialized non-for-profits and for-profit organizations, institutions, databases, and title registries either promoting or executing their own research on works of art. Yet the collector looking to buy a piece of art, nowadays, needs more factually based proof, regarding a works authenticity, ownership and past chains of possession. This is to not only ensure that the object is worth the monetary investment that a collectors is making in the long term, but it also means that the collectors are safeguarding themselves from future claims, potential legal costs and, not to mention the harm done to their reputation or brand. Recently the market has responded with a surge in insurance policies providing defective title protection. This, however, is only a segmented approach to a wider solution, and there remains much more to be done, at both a national and international level, in order to improve the restitution process for stolen and looted art.

[1] The Nature of these objects can range from traditional works of art, from various period streams, Old Masters, European Expressionist and Impressionists, objects of Judaica, collectibles, and other art or religious objects. The author recognises that Books, Manuscript and numerous other objects were and are still the aim of looting happening, however these are not the main focus of this article.

Sarah Mae Lieverse is a London-based arts and law writer and researcher focusing on the topic of provenance, due diligence and restitution in the arts. She is set to launch her own alternative consultancy platform at the end of May: Art&Law&War.