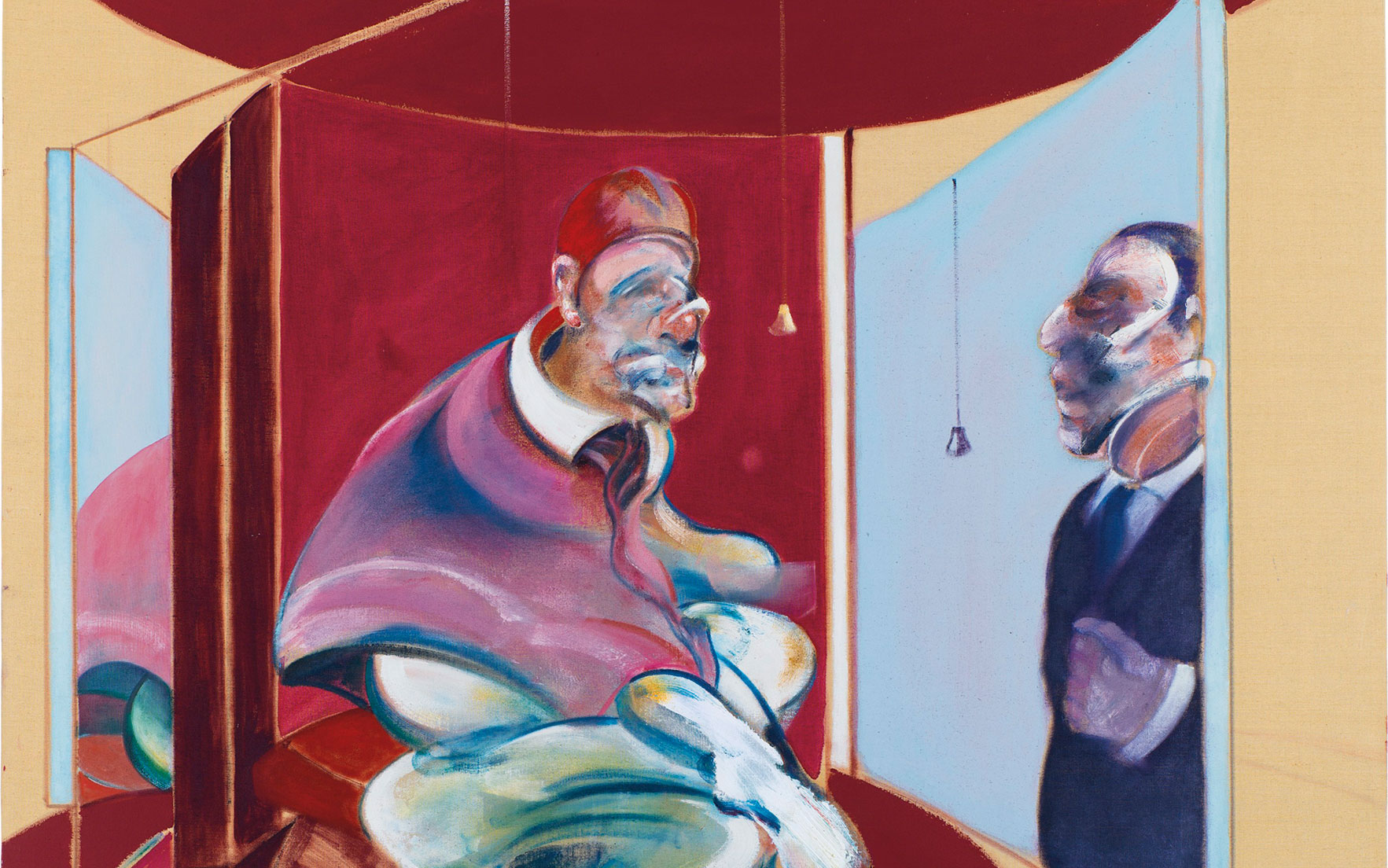 Undoubtedly the star lot of the Post-War and Contemporary Evening sales in London, Study of a Red Pope 1962, 2nd version 1971 was offered by Christie’s on the 5th of October. This work is the last of Bacon’s famous papal portraits, and since its purchase by a private European collector in 1973, it has remained hidden from the public eye for almost half a century.

Inspired by Diego Velázquez’s Portrait of Innocent X (1650), Bacon decided to rework his original 1962 painting by adding the figure of his lover, George Dyer. The inclusion of Bacon’s two muses, his homosexual criminal partner and the leader of the Catholic Church, in the same work makes it both controversial and extremely rare. Heightening the dramatic effect of the work even further is the fact that, two days before Bacon’s retrospective at the Grand Palais that same year, George Dyer took his own life. Of the work Christie’s writes, “Both figures, for Bacon, exemplified the magnificence and fragility of human existence”.

Despite all of this, Bacon’s rare masterpiece failed to sell. Not one bid was produced for the work. With raised eyebrows and open mouths, the art world watched as, what was supposed to have been a record-breaking lot, was immediately bought in by the auction house for £58 million. To describe this as a failure would be an oversimplification. This was a colossal and confusing fumble, akin to arriving at the Super Bowl on the day of the match only to witness both teams refuse to participate, without offering an explanation.

Study of a Red Pope 1962, 2nd version 1971 possessed all the qualities necessary for a work to succeed on the auction block, including an impeccable provenance, a rare subject matter, and a compelling backstory. Yet, it still failed to sell. What caused this colossal flop?

One theory is that Christie’s overestimated the value of the work, giving it an overly ambitious presale estimate of £60 to £80 million. Historically, large-scale triptychs have driven the top end of the Bacon market, and Study of a Red Pope 1962, 2nd version 1971 is composed of a single canvas. The highest selling single canvas by Bacon, Portrait of George Dyer Talking (1966), sold in 2014 for a hammer price of £37.6 million (£42.4 million with buyer’s premium). This estimate would have been £20 to £40 million higher than the 2014 result, which was likely an overly optimistic estimate, even for an artist that regularly commands such incredibly high prices at auction.

A second possible theory concerns the psychology of bidders at auction. Although there were reportedly several interested collectors, no one “broke the ice” by offering the starting bid. While one initial bid may have promoted others to bid, the continued silence may have caused interested bidders to hesitate.

Ultimately, Christie’s succeeded in selling another work by Francis Bacon, Head with Raised Arm (1955), for £10 million (£11.4 million with buyer’s premium) later on in the sale. This time, Christie’s estimation was more on the mark, with the result hitting the high end of the predicted estimate. This work by Bacon was hidden from the public eye for even longer, for over half of a century.

However, Christie’s recent decision to cancel their summer Post-War and Contemporary sale meant that the auction house had enough quality material to make up for this loss. Christie’s had a total cumulative turnover of £94.98 million (£99.5 million with buyer’s premium). Although the result was significantly below the projected turnover due to the failure of the first Bacon lot, the results were twice that of Sotheby’s sale, which grossed £46.6 million (£50.3 million with buyer’s premium).

A work by Jean-Michel Basquiat, entitled Red Skull (1982), became the star lot when it sold at Christie’s for £14.5 million (£16.5 million with buyer’s premium). The recent opening of the large-scale retrospective Basquiat: Boom for Real at the Barbican Art Gallery in London undoubtedly provided additional support to the artist’s already thriving market.

David Hockney’s work, 15 Canvas Study of the Grand Canyon (1998), is another example of an artist’s market responding positively to institutional validation. Hockney’s recent retrospective at the Tate Britain seemed to boost his market more than expected, with 15 Canvas Study of the Grand Canyon selling above the presale estimate for £5.2 million (£6 million with buyer’s premium).