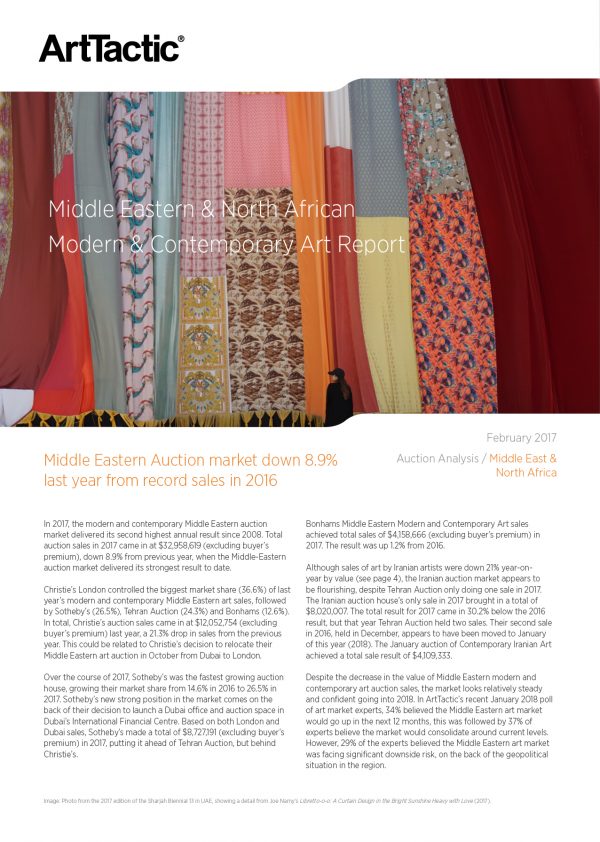 Christie’s London controlled the biggest market share (36.6%)
of last year’s modern and contemporary Middle Eastern art sales, followed by Sotheby’s (26.5%), Tehran Auction (24.3%) and Bonhams (12.6%). In total, Christie’s auction sales came in at $12,052,754 (excluding buyer’s premium) last year, a 21.3% drop in sales from the previous year. This could be related to Christie’s decision to relocate their Middle Eastern art auction in October from Dubai to London.

Over the course of 2017, Sotheby’s was the fastest growing auction house, growing their market share from 14.6% in 2016 to 26.5% in 2017. Sotheby’s new strong position in the market comes on the back of their decision to launch a Dubai office and auction space in Dubai’s International Financial Centre. Based on both London and Dubai sales, Sotheby’s made a total of $8,727,191 (excluding buyer’s premium) in 2017, putting it ahead of Tehran Auction, but behind Christie’s.