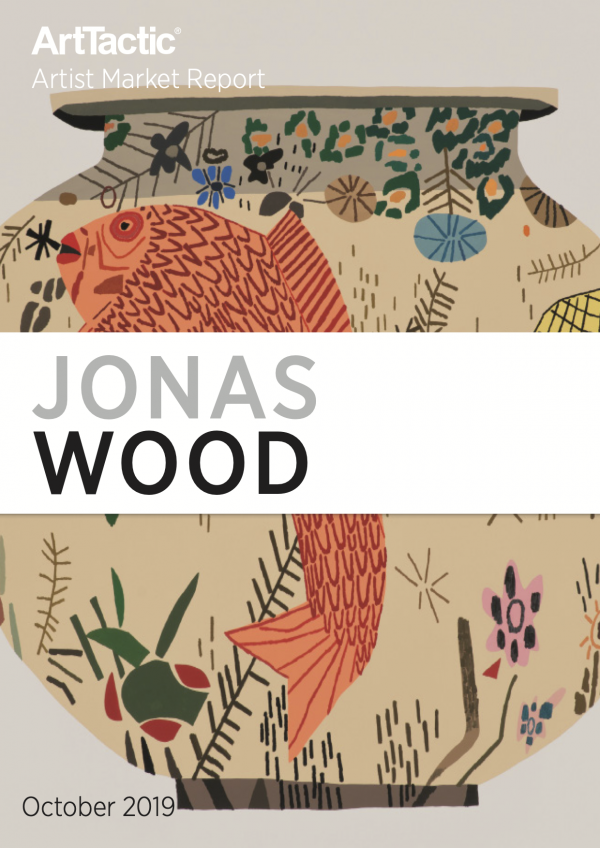 This is the inaugural ArtTactic report on the market for Jonas Wood (American, b. 1977). The report analysis takes a forensic look at different aspects of his market, including experts’ market confidence, exhibition and institutional analysis, as well as an in-depth look at every aspect of his auction market, broken down into specific series of works that underpin his career.

97% sell-through rate at auction since 2011: Overall, Wood’s market has shown an impressive sell-through-rate of 97% since 2011, with only five lots unsold out of one hundred and forty-nine lots offered at auction. All twenty-four lots so far offered for sale in 2019 have found buyers.

A healthy level of curatorial attention in 2019: Wood’s exhibition activity has been robust during the past decade, with an average of eleven shows each year. The majority of his exhibitions have been commercial, representing 71% of total shows since 2002 (107 shows in total) and comprising 32 solo and 75 group presentations of his work. Commercial activity has so far reduced in 2019 (3 shows in total), to the lowest number of exhibitions since 2012, however these have included a solo show at Gagosian (USA) and a two-person show with Shio Kusaka at Masahiro Maki Gallery (Japan). Wood’s institutional or museum activity has been limited by comparison, with 40 shows in total (5 solo and 35 group), however the quality of exhibitions has been very strong in recent years, with the group show Human Interest: Portraits from the Whitney’s Collection at the Whitney Museum of American art, New York (2016), the solo presentation Jonas Wood: Still Life With Two Owls (MOCA) and the group show One Day at a Time: Manny Farber and Termite Art, both at the Museum of Contemporary Art (MOCA) in Los Angeles (between 2016 and 2018) and recently in 2019, Wood has been given his first major solo museum retrospective at the Dallas Museum of Art (March – July 2019). The number of museum shows has increased in 2019 (4 shows in total, up 33% from 2018) with the first instance of a majority of institutional shows for the artist since since 2002. It is to be expected that a healthy level of curatorial attention may increase the level of demand for his work and impact auction sales and prices as international exposure increases.

ArtForecaster is delighted to launch a new forecasting reward system that awards players with points which can be redeemed in ArtTactic research reports and online courses. This report can be bought by redeeming your ArtForecaster Points.