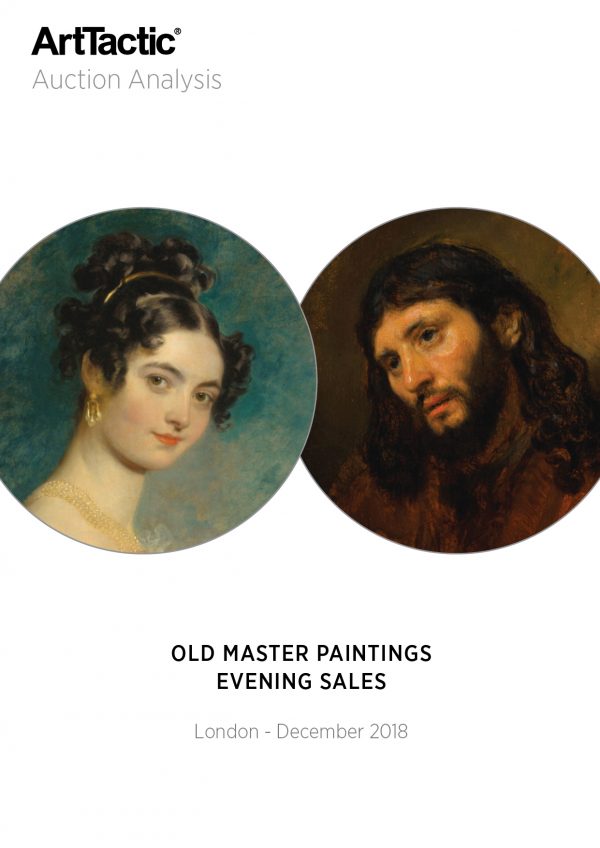 London’s Evening Sales of Old Master Paintings pass the test, as sales are up 56% from December 2017

The Old Masters market is closing out 2018 on a good note, though with not nearly as much buzz as it had earlier in the year. Both Master Week at Sotheby’s and Classic Week at Christie’s brought us a total of three sales and another preview with Victoria Beckham, though sadly, there were no more performances from Beyoncé to boost enthusiasm. Of the 78 lots on offer, there was a total of 60 lots sold between the two main evening sales, raising a total of £42,867,000 (excluding buyer’s premium), within the presale estimate of £36.14 million to  £53.39 million. The total sales were up 56.2% from December 2017, but 0.2% lower than July 2018, however this might be expected due to the usual difference in number of lots on offer, with December sales historically being much smaller than in July.

This report presents an in-depth comparative analysis of the Old Master Paintings evening sales at Sotheby’s and Christie’s in London in December 2018. The analysis also provides analytical tools looking at annual trends between 2010 and 2018.

What is new in this report?

Based on feedback from our readers we have added a new section, which provides a detailed list of all the lots in the auction with its sales (hammer) prices. The list also includes information on winning buyers and paddle numbers. We have further expanded the individual auction house pages in the report as well as the overview Auction Analysis.

This report is popular among dealers, auction houses and collectors, who want to get an in-depth understanding of auction trends in the Old Master Paintings auction market and follow the performance of the two top auction houses this year.

Auction Overview: Performance by value and numbers for each auction house.

London’s Evening Sales of Old Master Paintings pass the test, as sales are up 56% from December 2017