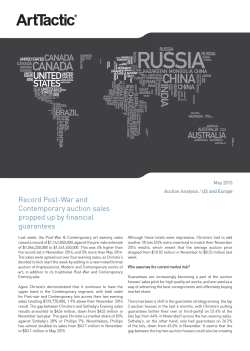 Again Christie’s demonstrated that it continues to have the upper hand in the Contemporary segment, with total sales for Post-war and Contemporary lots across their two evening sales totalling $729,770,000; 1.9% above their November 2014 result. The gap between Christie’s and Sotheby’s Evening sales results amounted to $436 million, down from $452 million in November last year. This gave Christie’s a market share of 65% against Sotheby’s 28% or Phillips 7%.

Although these totals were impressive, Christie’s had to add another 20 lots (23% extra inventory) to match their November 2014 results, which meant that the average auction price dropped from $10.02 million in November 2014 to $8.33 million in May 2015.