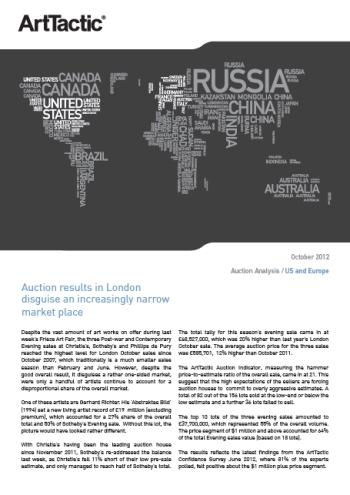 Despite the vast amount of art works on offer during last week’s Frieze Art Fair, the three Post-war and Contemporary Evening sales at Christie’s, Sotheby’s and Phillips de Pury reached the highest level for London October sales since October 2007, which traditionally is a much smaller sales season than February and June. However, despite the good overall result, it disguises a rather one-sided market, where only a handful of artists continue to account for a disproportional share of the overall market.

One of these artists are Gerhard Richter. His ’Abstraktes Bild’ (1994) set a new living artist record of £19 million (excluding premium), which accounted for a 27% share of the overall total and 50% of Sotheby’s Evening sale. Without this lot, the picture would have looked rather different.

With Christie’s having been the leading auction house since November 2011, Sotheby’s re-addressed the balance last week, as Christie’s fell 11% short of their low pre-sale estimate, and only managed to reach half of Sotheby’s total. The total tally for this season’s evening sale came in at £68,527,000, which was 20% higher than last year’s London October sale. The average auction price for the three sales was £585,701, 12% higher than October 2011.