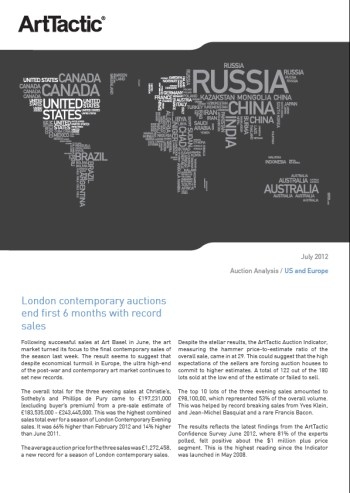 Following successful sales at Art Basel in June, the art market turned its focus to the final contemporary sales of the season last week. The result seems to suggest that despite economical turmoil in Europe, the ultra high-end of the post-war and contemporary art market continues to set new records.

Despite the stellar results, the ArtTactic Auction Indicator, measuring the hammer price-to-estimate ratio of the overall sale, came in at 29. This could suggest that the high expectations of the sellers are forcing auction houses to commit to higher estimates. A total of 122 out of the 180 lots sold at the low end of the estimate or failed to sell.
The top 10 lots of the three evening sales amounted to £98,100,00, which represented 53% of the overall volume. This was helped by record breaking sales from Yves Klein, and Jean-Michel Basquiat and a rare Francis Bacon.

The results reflects the latest findings from the ArtTactic Confidence Survey June 2012, where 81% of the experts polled, felt positive about the $1 million plus price segment. This is the highest reading since the Indicator was launched in May 2008.