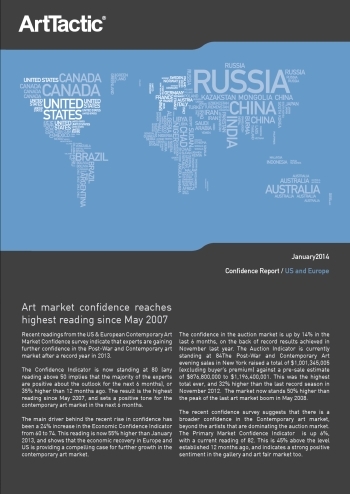 Positive outlook: Recent readings from the ArtTactic US & European Contemporary Art Market Confidence survey indicates that experts are gaining further confidence in the Post-War and Contemporary art market after a record year in 2013.

Expert confidence at same level as in May 2007: The US and European Art Market Confidence Indicator is now standing 35% higher than January 2013. The result is the highest reading since May 2007, and sets a positive tone for the Contemporary art market in the next 6 months.

Middle-market: Increasing confidence in the middle-market as experts are seeing increasing opportunities in the $100-$500k and the $500k – $1 million segment.

Risk of speculation: The Speculation Barometer has increased by 4%, currently showing a reading of 6.9. The current reading is 11% above the historic average. A total of 60% of the respondents (against 55% six months ago), rated the speculation level at 7 or above (on a scale from 1 to 10, where 1 is very low speculation and 10 is very high speculation). Experts remain concerned that short-term investors and speculators are boosting art prices in the current market.