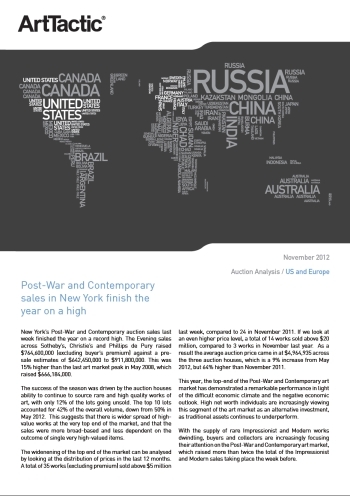 Post-War and Contemporary sales in New York finish the year on a high.

The success of the season was driven by the auction houses ability to continue to source rare and high quality works of art, with only 12% of the lots going unsold. The top 10 lots accounted for 42% of the overall volume, down from 50% in May 2012. This suggests that there is wider spread of high-value works at the very top end of the market, and that the sales were more broad-based and less dependent on the outcome of single very high-valued items.

The widening at the top end of the market can be analysed by looking at the distribution of prices. A total of 35 works (excluding premium) sold above $5 million last week, compared to 24 in November 2011. If we look at even higher price levels, a total of 14 works sold above $20 million, compared to 3 works in November last year. As a result the average auction price came in at $4,964,935 across the three auction houses, which is a 9% increase from May 2012, but 64% higher than November 2011.

This year, the top-end of the Post-War and Contemporary art market has demonstrated a remarkable performance in light of the difficult economic climate and the negative economic outlook. High net worth individuals are increasingly viewing this segment of the art market as an alternative investment, as traditional assets continues to underperform.