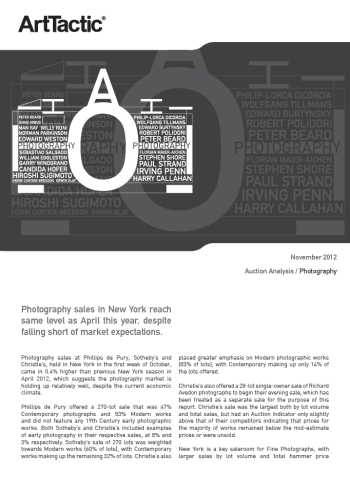 Photography sales at Phillips de Pury, Sotheby’s and Christie’s, held in New York in the first week of October, came in 0.4% higher than previous New York season in April 2012, which suggests the photography market is holding up relatively well, despite the current economic climate.

Phillips de Pury offered a 270-lot sale that was 47% Contemporary photographs and 53% Modern works and did not feature any 19th Century early photographic works. Both Sotheby’s and Christie’s included examples of early photography in their respective sales, at 8% and 3% respectively. Sotheby’s sale of 270 lots was weighted towards Modern works (60% of lots), with Contemporary works making up the remaining 32% of lots. Christie’s also placed greater emphasis on Modern photographic works (83% of lots), with Contemporary making up only 14% of the lots offered.