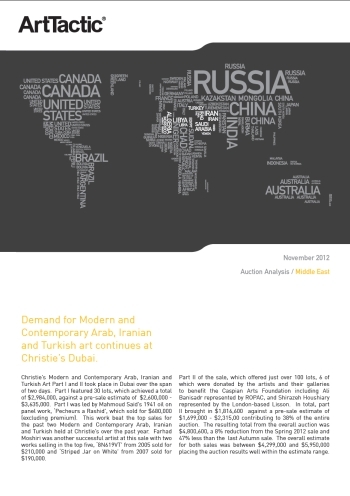 Solid demand at Christie’s Dubai, as Modern and Contemporary Middle-East sales comes well within the estimate.

Part II of the sale, which offered just over 100 lots, 6 of which were donated by the artists and their galleries to benefit the Caspian Arts Foundation including Ali Banisadr represented by ROPAC, and Shirazeh Houshiary represented by the London-based Lisson. In total, part II brought in $1,816,600 against a pre-sale estimate of $1,699,000 – $2,315,00 contributing to 38% of the entire auction.