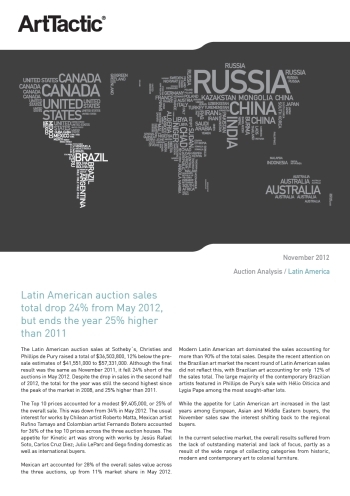 The Top 10 prices accounted for a modest $9,405,000, or 25% of the overall sale. This was down from 34% in May 2012. The usual interest for works by Chilean artist Roberto Matta, Mexican artist Rufino Tamayo and Colombian artist Fernando Botero accounted for 36% of the top 10 prices across the three auction houses. The appetite for Kinetic art was strong with works by Jesús Rafael Soto, Carlos Cruz Diez; Julio LeParc and Gego finding domestic as well as international buyers.

Mexican art accounted for 28% of the overall sales value across the three auctions, up from 11% market share in May 2012. Modern Latin American art dominated the sales accounting for more than 90% of the total sales. Despite the recent attention on the Brazilian art market the recent round of Latin American sales did not reflect this, with Brazilian art accounting for only 12% of the sales total. The large majority of the contemporary Brazilian artists featured in Phillips de Pury’s sale with Hélio Oiticica and Lygia Pape among the most sought-after lots.