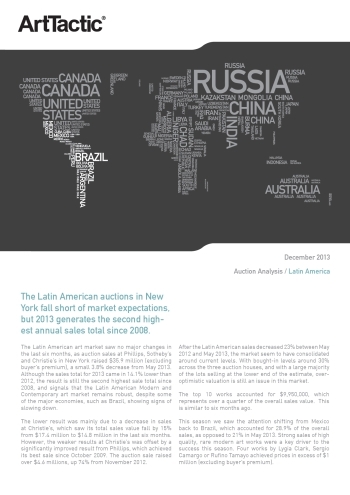 The Latin American art market saw no major changes in the last six months, as auction sales at Phillips, Sotheby’s and Christie’s in New York raised $35.9 million (excluding buyer’s premium), a small 3.8% decrease from May 2013. Although the sales total for 2013 came in 14.1% lower than 2012, the result is still the second highest sale total since 2008, and signals that the Latin American Modern and Contemporary art market remains robust, despite some of the major economies, such as Brazil, showing signs of slowing down.

The lower result was mainly due to a decrease in sales at Christie’s, which saw its total sales value fall by 15% from $17.4 million to $14.8 million in the last six months. However, the weaker results at Christie’s was offset by a significantly improved result from Phillips, which achieved its best sale since October 2009. The auction sale raised over $4.6 millions, up 74% from November 2012.

After the Latin American sales decreased 23% between May 2012 and May 2013, the market seem to have consolidated around current levels. With bought-in levels around 30% across the three auction houses, and with a large majority of the lots selling at the lower end of the estimate, over-optimistic valuation is still an issue in this market.

The top 10 works accounted for $9,950,000, which represents over a quarter of the overall sales value. This is similar to six months ago.