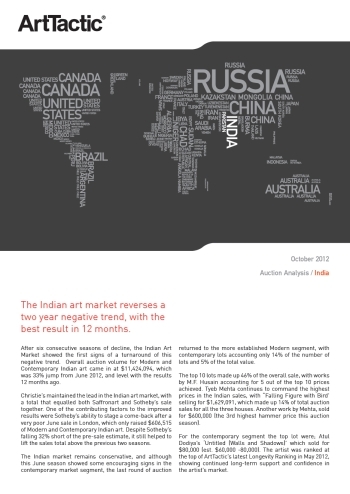 The Indian art market reverses a two year negative trend, with the best result in 12 months.

After six consecutive seasons of decline, the Indian Art Market showed the first signs of a possible turnaround. Overall auction volume for Modern and Contemporary Indian art came in at $11,424,094, which was 33% jump from June 2012, and level with the results 12 months ago.

Christie’s maintained the lead in the Indian art market, with a total that equalled both Saffronart and Sotheby’s sale together. One of the contributing factors to the improved results were Sotheby’s ability to stage a come-back after a very poor June sale in London, which only raised $606,515 of Modern and Contemporary Indian art. Despite Sotheby’s falling 32% short of the pre-sale estimate, it still helped to lift the sales total above the previous two seasons.

The Indian market remains conservative, and although this June season showed some encouraging signs in the contemporary market segment, the last round of auction returned to the more established Modern segment, with contemporary lots accounting only 14% of the number of lots and 5% of the total value.

The top 10 lots made up 46% of the overall sale, with works by M.F. Husain accounting for 5 out of the top 10 prices achieved. Tyeb Mehta continues to command the highest prices in the Indian sales, with “Falling Figure with Bird’ selling for $1,629,091, which made up 14% of total auction sales for all the three houses. Another work by Mehta, sold for $600,000 (the 3rd highest hammer price this auction season).