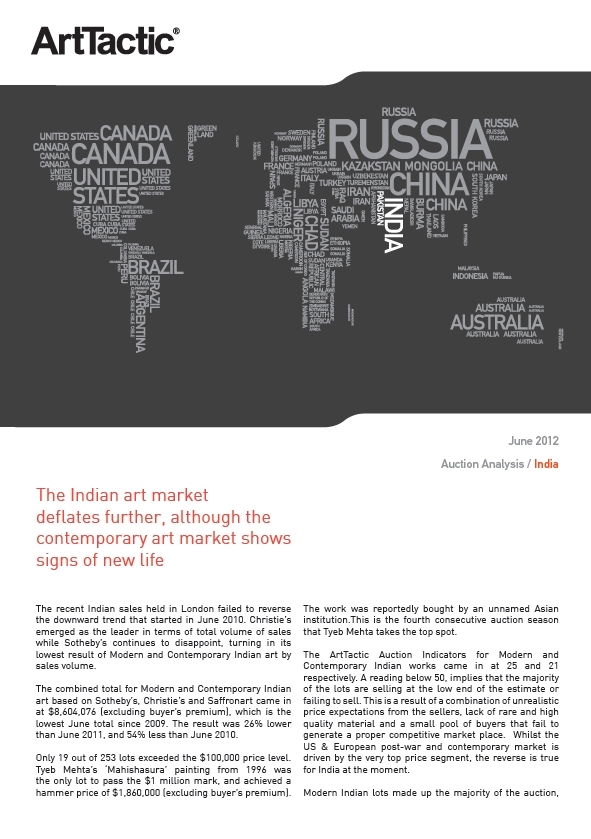 The recent Indian sales held in London failed to reverse the downward trend that started in June 2010. Christie’s emerged as the leader in terms of total volume of sales while Sotheby’s continues to disappoint, turning in its lowest result of Modern and Contemporary Indian art by sales volume since 2009.

For the first time in 12 months, the Contemporary Indian art market saw an increase in turnover. Contemporary works took an 11% share of the total, increasing sales by 78%, from $527,958 in March 2012 to $940,375. This was based on 34 contemporary lots sold. This result was strongly assisted by Subodh Gupta’s ‘Untitled’ painting and Bharti Kher’s work titled ‘Indra’s Net Mirror 8’, which sold for $187,826 and $101,750 respectively. Both these works were auctioned through Saffronart. The significant adjustment in prices in the contemporary art market seems to have started to generate renewed interest in Indian and South Asian contemporary art.

At the moment, it looks like Saffronart is the auction house to watch. We believe that its steady performance in the Modern and increasingly in the Contemporary Indian art market, will be rewarded as the market picks up momentum