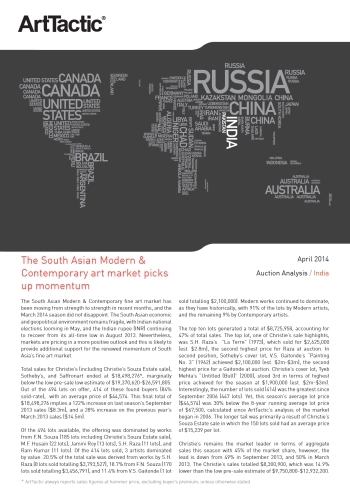 The South Asian Modern & Contemporary fine art market has been moving from strength to strength in recent months, and the March 2014 season did not disappoint. The South Asian economic and geopolitical environment remains fragile, with Indian national elections looming in May, and the Indian rupee (INR) continuing to recover from its all-time low in August 2013. Nevertheless, markets are pricing in a more positive outlook and this is likely to provide additional support for the renewed momentum of South Asia’s fine art market.

Buy subscription for full access to the report, which includes comparative analysis of Sotheby’s, Christie’s and Saffronart.