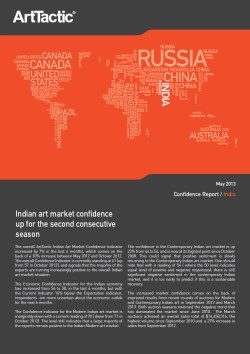 Indian art market confidence up for the second consecutive season

The overall ArtTactic Indian Art Market Confidence Indicator increased by 7% in the last 6 months, which comes on the back of a 10% increase between May 2012 and October 2012. The overall Confidence Indicator is currently standing at 61 (up from 57 in October 2012), and signals that the majority of the experts are turning increasingly positive to the overall Indian art market situation.

The Confidence Indicator for the Modern Indian art market is marginally down with a current reading of 70 ( down from 71 in October 2012). The level still indicates that a large majority of the experts remain positive to the Indian Modern art market.

The increased market confidence comes on the back of improved results from recent rounds of auctions for Modern and Contemporary Indian art in September 2012 and March 2013. Both auction seasons reversed the negative trend that has dominated the market since June 2010. The March auctions achieved an overall sales total of $14,458,316, the highest volume since September 2010 and a 27% increase in sales from September 2012.