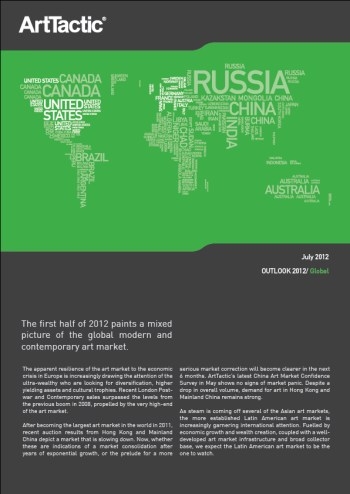 The first half of 2012 paints a mixed picture of the global modern and contemporary art market.

This lastest report from ArtTactic reviews the market from January to June 2012 and re-assesses the Outlook for the Global contemporary art market in the next 6 months.

The apparent resilience of the art market to the economic crisis in Europe is increasingly drawing the attention of the ultra-wealthy who are looking for diversification, higher yielding assets and cultural trophies. Recent London Post-war and Contemporary sales surpassed the levels from the previous boom in 2008, propelled by the very high-end of the art market.

After becoming the largest art market in the world in 2011, recent auction results from Hong Kong and Mainland China depict a market that is slowing down. Now, whether these are indications of a market consolidation after years of exponential growth, or the prelude for a more serious market correction will become clearer in the next 6 months. ArtTactic’s latest China Art Market Confidence Survey in May shows no signs of market panic. Despite a drop in overall volume, demand for art in Hong Kong and Mainland China remains strong.