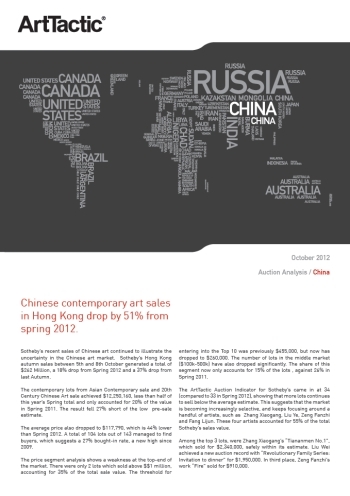 Sotheby’s recent sales of Chinese art continued to illustrate the uncertainty in the Chinese art market. Sotheby’s Hong Kong autumn sales between 5th and 8th October generated a total of $262 Million, a 18% drop from Spring 2012 and a 37% drop from last Autumn.

The contemporary lots from Asian Contemporary sale and 20th Century Chinese Art sale achieved $12,250,160, less than half of this year’s Spring total and only accounted for 19% of the value in Spring 2011. The result fell 27% short of the low pre-sale estimate.

The price segment analysis shows a weakness at the top-end of the market. There were only 2 lots which sold above $$1 million, accounting for 35% of the total sale value. The threshold for entering into the Top 10 was previously $455,000, but now has dropped to $260,000. The number of lots in the middle market ($100k-500k) have also dropped significantly. The share of this segment now only accounts for 15% of the lots , against 26% in Spring 2011.

The ArtTactic Auction Indicator for Sotheby’s came in at 34 (compared to 33 in Spring 2012), showing that more lots continues to sell below the average estimate. This suggests that the market is becoming increasingly selective, and keeps focusing around a handful of artists, such as Zhang Xiaogang, Liu Ye, Zeng Fanzhi and Fang Lijun. These four artists accounted for 55% of the total Sotheby’s sales value.