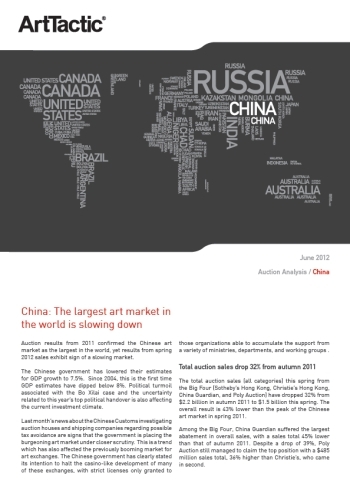 China: The largest art market in the world is slowing down.

Auction results from 2011 confirmed the Chinese art market as the largest in the world, yet results from spring 2012 sales exhibit sign of a slowing market.

The total auction sales (all categories) this spring from the Big Four (Sotheby’s Hong Kong, Christie’s Hong Kong, China Guardian, and Poly Auction) have dropped 32% from $2.2 billion in autumn 2011 to $1.5 billion this spring. The overall result is 43% lower than the peak of the Chinese art market in spring 2011.

Among the Big Four, China Guardian suffered the largest abatement in overall sales, with a sales total 45% lower than that of autumn 2011. Despite a drop of 39%, Poly Auction still managed to claim the top position with a $485 million sales total, 36% higher than Christie’s, who came in second.