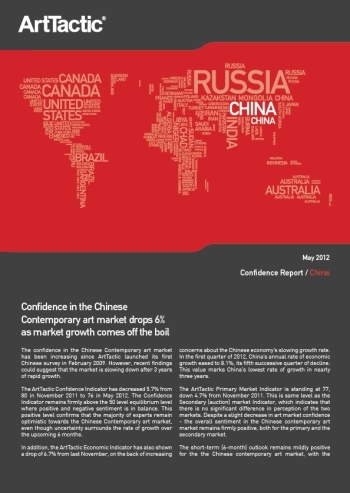 The confidence in the Chinese Contemporary art market has been increasing since ArtTactic launched its first Chinese survey in February 2009. However, recent findings could suggest that the market is slowing down after 3 years of rapid growth.

The ArtTactic Confidence Indicator has decreased 5.7% from 80 in November 2011 to 76 in May 2012. The Confidence Indicator remains firmly above the 50 level equilibrium level where positive and negative sentiment is in balance. This positive level confirms that the majority of experts remain optimistic towards the Chinese Contemporary art market, even though uncertainty surrounds the rate of growth over the upcoming 6 months.

In addition, the ArtTactic Economic Indicator has also shown a drop of 6.7% from last November, on the back of increasing concerns about the Chinese economy’s slowing growth rate.  In the first quarter of 2012, China’s annual rate of economic growth eased to 8.1%, its fifth successive quarter of decline.  This value marks China’s lowest rate of growth in nearly three years.