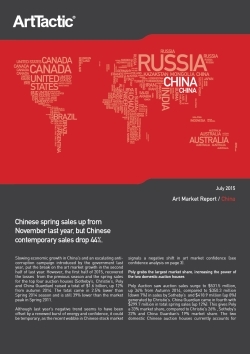 Overall Chinese art sales up first half of 2015, but Chinese contemporary sales drop 44%.

Slowing economic growth in China’s and an escalating anti-corruption campaign introduced by the government last year, put the break on the art market growth in the second half of 2014. However, the first half of 2015, recovered the losses from the previous season and the spring sales for the top four auction houses (Sotheby’s, Christie’s, Poly and China Guardian) raised a total of $1.6 billion, up 12% from autumn 2014. The total came in 2.5% lower than Spring 2014 season and is still 39% lower than the market peak in Spring 2011.