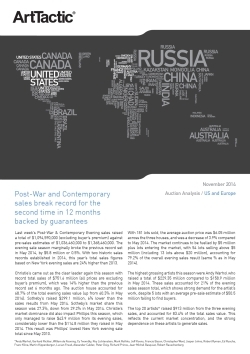 Christie’s came out as the clear leader again this season with record total sales of $751.6 million (all prices are excluding buyer’s premium), which was 14% higher than the previous record set 6 months ago. The auction house accounted for 68.7% of the total evening sales value (up from 60.3% in May 2014). Sotheby’s raised $299.1 million, 6% lower than the sales results from May 2014. Sotheby’s market share this season was 27.3%, down from 29.2% in May 2014. Christie’s market dominance did also impact Phillips this season, which only managed to raise $43.9 million from its evening sales, considerably lower than the $114.8 million they raised in May 2014. This result was Phillips’ lowest New York evening sale total since May 2010.

The top 20 artists raised $913 million from the three evening sales, and accounted for 83.4% of the total sales value. This reflects the current market concentration, and the strong dependence on these artists to generate sales.

It looks as if the art auction market has found a new addiction: a heavy reliance on financial guarantees to convince sellers to depart with their treasured objects. The question is whether this is a sign of confidence or a sign of desperation. The report includes a new section looking at the extent of these guarantees, and the potential risks ahead.