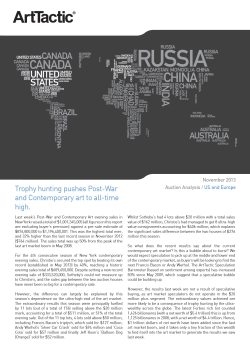 For the 4th consecutive season of New York contemporary evening sales, Christie’s secured the top spot by beating its own record (established in May 2013) by 40%, reaching a historic evening sales total of $609,650,000. Despite setting a new record evening sale of $333,520,000, Sotheby’s could not measure up to Christie’s, and the sales gap between the two auction houses have never been so big for a contemporary sale.

However, the difference can largely be explained by this season’s dependence on the ultra-high end of the art market. The extraordinary results this season were principally fuelled by 11 lots (out of a total of 176) selling above the $20 million mark, accounting for a total of $511 million, or 51% of the total evening sale. Out of the 11 top lots, 4 lots sold above $50 million, including Francis Bacon’s triptych, which sold for $127 million; Andy Warhol’s ‘Silver Car Crash’ sold for $94 million and ‘Coca Cola’ sold for $57 million and finally Jeff Koon’s ‘Balloon Dog (Orange)’ sold for $52 million.

Whilst Sotheby’s had 4 lots above $20 million with a total sales value of $162 million, Christie’s had managed to get 8 ultra-high value consignments accounting for $406 million, which explains the significant sales difference between the two houses of $276 million this season.

So what does the recent results say about the current contemporary art market? Is this a bubble about to burst? We would expect speculation to pick up at the middle and lower end of the contemporary market, as buyers will be looking to find the next Francis Bacon or Andy Warhol. The ArtTactic Speculation Barometer (based on sentiment among experts) has increased 83% since May 2009, which suggest that a speculative bubble could be building up.

However, the results last week are not a result of speculative buying, as art market speculators do not operate in the $20 million plus segment. The extraordinary values achieved are more likely to be a consequence of trophy hunting by the ultra-wealthy across the globe. The latest Forbes rich list counted 1,426 billionaires (with a net worth of $5.4 trillion) this is up from 1,125 billionaires in 2008, with a net worth of $4.4 trillion. Hence, $1 trillion dollars of net worth have been added since the last art market boom, and it takes only a tiny fraction of this wealth to find itself into the art market to generate the results we saw last week.