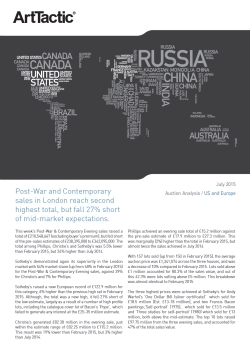 Sotheby’s demonstrated again its superiority in the London market with 54% market share (up from 48% in February 2015) for the Post-War & Contemporary Evening sales, against 39% for Christie’s and 7% for Phillips.

Sotheby’s raised a new London high of £122.9 million for this category, 6% higher than the previous high set in February 2015. However, despite the record, it fell 21% short of the low estimate, largely as a result of a number of high profile lots, including the catalogue cover lot of one of Bacon’s ‘Pope’ paintings, which failed to generate any interest at the £25-35 million estimate.