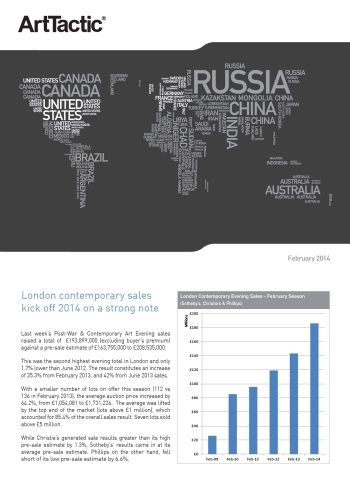 London contemporary sales kick off 2014 on a strong note

Among the top performers were Francis Bacon and Gerhard Richter, who raised a total of £77,950,000 based on 6 works. However, there was a lot of interest in the younger generation of artists such as Oscar Murillo or Lucien Smith, who both achieved results significantly higher than market expectations. We saw three lots by Lucien Smith in the top 10 Surprise Lots (highest price-to-estimate ranking). Among the older generation, Domenico Gnoli’s “Black hair”from 1969, sold for more than twice its high pre-sale estimate.