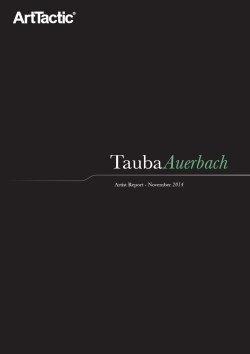 Auction sales: Since her auction debut in 2010, sales of Auerbach’s works have grossed almost $9.5 million (hammer), with a total of 84 lots offered so far. During this time, prices for the ‘fold’ paintings have risen from under $300,000 in 2012 to the current auction record of over $1.5 million. Phillips was the first auction house to offer Auerbach’s works, with Sotheby’s and Christie’s following suit. Of the major auction houses, Phillips has offered the greatest share of high-value ‘fold’ paintings and is the only auction house to consistently include Auerbach in prestigious evening sales.

Museum Interest: In the last ten years works by Tauba Auerbach have been exhibited in 109 solo and group shows in museums and public collections worldwide, including MoMA (New York), MOCA (Los Angeles) and Musée d´Art Moderne de la Ville de Paris. This year, Auerbach had a solo exhibition at the Institute for Contemporary Art in London titled The New Ambidextrous Universe. Her works have been acquired by several major institutions, including the Whitney Museum of American Art in New York, the Museum of Modern Art (San Francisco) and the Zabludowicz Collection in London.

Secondary & Primary Market imbalance: Auerbach’s representatives have recently increased the primary market price for the ‘fold’ paintings from $40,000 to $60,000. However, the secondary market price has dramatically surpassed gallery prices in recent years. Although the rapid price growth could create a market for short-term speculative investment, strong institutional and critical support of Auerbach’s work still signals the potential for a steady short- to medium term performance.