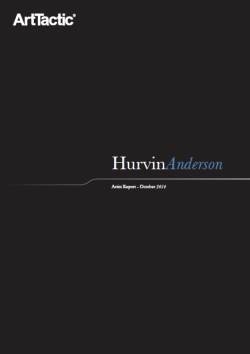 Confidence in the auction market: The secondary (auction) market prices for Anderson’s work have been rising steadily up until July 2014, when the market experienced a new surge in interest on the back of two works. ‘Afrosheen’ (2009) which carried a pre-sale estimate of £300,000-£400,000 at Christie’s, finally sold for £1.1 million.

Rarity and limited supply: As the artist only creates around five works per year, his works are highly sought after by collectors. Paintings coming to auction is likely to see high demand as a result of this.

Favourite with the critics: All of Anderson’s major exhibitions have been well received by the critics, and suggested him as a potential Turner Prize nominee. The strong critical and institutional support will continue to help the market and prevent him from becoming a victim of fashion.

Comparable market: Anderson’s work and artistic career has many resemblances with the ones of Peter Doig, whom Anderson was a pupil of at the Royal College of Art in the late 1990s.

Rapidly rising auction estimates:  The auction market has clearly raised its expectations and the question is whether the current momentum can be sustained.

Collectors cashing in: With Anderson’s prices at auction rising quickly, the artist may become a target for speculative buying. With very few paintings coming to the market, certain collectors are taking advantage of the current auction valuations.

Primary vs. Auction market imbalance: Anderson is noted for working in series where he only produces a limited amount of works per year. With the galley carefully controlling the supply and placemet of works, recent escalation in auction prices could result in a widening gap between primary market and auction prices.

Lack of visibility: With only a handful of works produced each year, there is a risk that the artist’s visibility (exhibitions and critical reviews) are not going to be sufficient to justify the new prices obtained at auction, and that the artist will be perceived as expensive relative to more prolific and ‘public’ contemporary artists emerging on the scene.

FREE REPORT: Anyone who plays ArtForecaster quizzes between 13.October – 17.October 2014 – will receive a complimentary copy of this report.