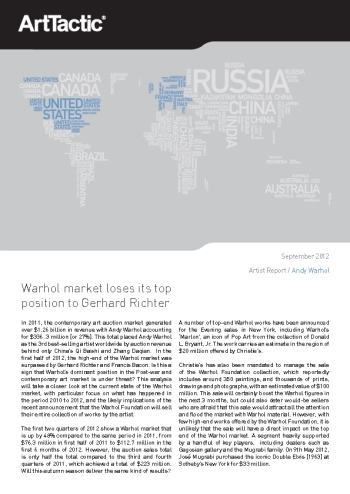 In 2011, the contemporary art auction market generated over $1.26 billion in revenue with Andy Warhol accounting for $336 .3 million (or 27%). This total placed Andy Warhol as the 3rd best-selling artist worldwide by auction revenue behind only China’s Qi Baishi and Zhang Daqian. In the first half of 2012, the high-end of the Warhol market was surpassed by Gerhard Richter and Francis Bacon. Is this a sign that Warhol’s dominant position in the Post-war and contemporary art market is under threat? This analysis will take a closer look at the current state of the Warhol market, with particular focus on what has happened in the period 2010 to 2012, and the likely implications of the recent announcement that the Warhol Foundation will sell their entire collection of works by the artist.

The first two quarters of 2012 show a Warhol market that is up by 48% compared to the same period in 2011, from $76.3 million in first half of 2011 to $112.7 million in the first 6 months of 2012. However, the auction sales total is only half the total compared to the third and fourth quarters of 2011, which achieved a total of $223 million. Will this autumn season deliver the same kind of results?