The UK Ivory Ban: Both Sides of the Story

The UK Ivory Ban: Both Sides of the Story 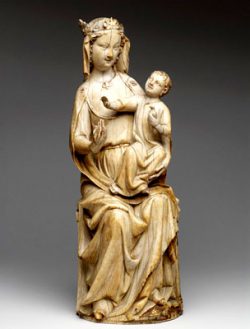 Statuette of the Virgin and Child. French, 1275-1300. Courtesy of the British Museum.

Considering the Commercial and Cultural Value of Ivory

Early last month, the UK proposed a comprehensive ban on the sale of all ivory artefacts carved before 1947. Under the current law, the 1989 Convention on International Trade in Endangered Species (CITES), the trade of ivory artefacts carved before 1947 is allowed. This regulation would restrict the international ivory trade in the UK even further. Even under the current laws, the UK was the world’s largest exporter of legal ivory between 2010 and 2015, according to the records kept by CITES.

The restrictions were put forward by Michael Gove, the UK’s environment secretary, who has expressed the wish to come as close as possible to a total ban. The proposed ban is subject to a 12-week public consultation until the end of 2017.

There are, of course, exceptions to Gove’s proposal. Four different types of items would be exempt from the ban: musical instruments; objects with only small amounts of ivory; items of significant artistic, historic, or cultural value; and transactions between museums. Despite these exceptions, this new proposed regulation will hopefully help put an end to the poaching of elephants for their ivory.

The devil is, unfortunately, in the details. Outlining the regulations and defining the specifics, such as what is a “small amount” of ivory, and what is, and is not, “culturally valuable”, is paramount. The UK could possibly follow in the footsteps of the US, which enacted an almost total ban on ivory in June of last year.

The Duke of Cambridge is a strong advocate of the ban, arguing that the preservation of elephants as a species should be the country’s primary concern. However, many important British museums have expressed concern that a ban could damage the UK’s cultural heritage. The British Museum alone has over 200 objects in their collection of gothic ivory carvings, which is one of the largest of its kind in the world.

On one hand, the ban could make it much more difficult for museums to share their collection internationally. The more regulations that are in place for ivory objects, the more hoops museums must jump through to import and export them for international exhibitions.

On the other hand, the argument that the ban would diminish the value of museums’ collections significantly is not quite valid. While the ivory ban would certainly diminish the financial value of a museum’s collection of ivory, it would not theoretically affect its cultural value. The ban would most certainly negatively affect many antique dealers, who may come to find that many expensive items in their possession are worthless and unsaleable. Fortunately, museums are in the business of caring for their ivory objects, and not profiting financially from them. If ivory is financially worthless and unsaleable, except between museums, then its cultural value would remain intact while its financial value would disappear. If the cultural value of ivory remains intact while elephant poaching decreases, then both sides could win. The solution will ultimately be found in compromise.

The considerations for the implementation of this ban are as numerous as they are nuanced. For example, one must consider the diverse origin of many of the ivory artefacts in UK museums. Museums in the UK have an obligation to care not only for their own cultural heritage, but for the cultural heritage of many different countries around the world. It is important to consider how the ban will affect issues surrounding restitution. If a museum decides to return an ivory artefact to its country of origin, would it even be possible under the proposed ban?

There are, of course, many more potential problems to consider before implementing the proposal. Fortunately, the UK can examine the trials and tribulations of America’s recent ban, and hopefully learn some important lessons early on about what will and won’t work. In the meantime, we must wait and see if the proposed ivory ban will become law in the UK.