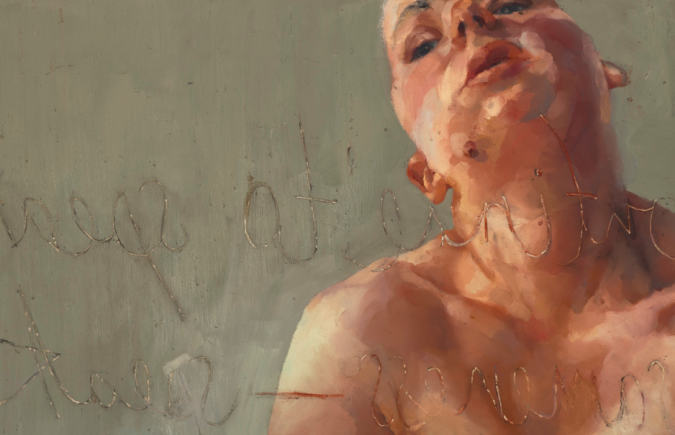 Detail of Propped (1992) by Jenny Saville. Saville set the record at auction for a living female artist in Sotheby’s London sale, The History of Now: The collection of David Tieger.  Image courtesy of Sotheby’s.

“All the media is subsumed with the shredding Banksy, and only an hour before, we had a world-record price for a living woman artist: Jenny Saville, £9.5 million for her iconic painting from the early 90s, which was really the story, but Banksy took the headlines.” – Colin Gleadell

For many in the art world, it is both strange and exhilarating when news stories from the art world make their way into popular culture. The moment that an art news story transforms into a world news story is precisely the moment when one’s inbox becomes flooded with messages from distant relatives and family friends entitled, “What does this mean?” or “What do you think?”, with the headline in question attached. It happened with Leonardo Da Vinci’s Salvator Mundi sale, and it’s happening again with Banksy’s self-shredding Girl with a Balloon stunt.

The story appeals to a wide audience, intriguing everyone from techies questioning the logistics of the shredding device to PR and marketing experts applauding Sotheby’s for such a successful publicity stunt. Even the art world must admit that the shredding has artistic merit, and while many artists have destroyed their own work in the past, no one has done it quite like this. The stunt is multi-faceted in that it references the history of the creative act of destruction in art, while also presenting a critique of the commodification of art by the auction houses and the wealthy individuals that frequent them. It can also function as a commentary on the inherently ephemeral nature of Street Art. In any case, this is not the first time that Banksy has intentionally subverted the art market. For example, in 2013 he sold his work for $60 on the streets of New York City, where they were assumed to be cheap knock-offs.

Girl with a Balloon was the final lot in Sotheby’s Contemporary Evening Sale in London. The sale took place on Friday October 5, when the city was flooded by international collectors attending the Frieze art fair. In an interview with Adam Green in ArtTactic Podcast, Colin Gleadell, art market columnist for The Daily Telegraph and Artnet, spoke about what it was like to see the stunt in person: “[The Banksy] was the last lot in the sale, and usually by the last lot people have left the sale room. In this case, it was no exception… Half the sale room had emptied out, and quite a lot of the journalists had left the floor and were out at the back, talking and interviewing people.”

One of the most interesting aspects of Gleadell’s account is his description of the journalists, or lack thereof, in the saleroom. Many of them had left, no doubt thinking they already had their headline: “One small event, one artist…an outsider in the art world, is upstaging everybody right within their own territory. All the media is subsumed with the shredding Banksy, and only an hour before, we had a world-record price for a living woman artist: Jenny Saville, £9.5 million for her iconic painting from the early 90s, which was really the story, but Banksy took the headlines.” Saville was one of seven female artists featured in the 67-lot sale, which included fellow Brits Cecily Brown and Tracey Emin, as well as Americans Elizabeth Peyton, Amy Sillman, and Pat Steir, along with Brazilian artist Beatriz Milhazes. All female artists in the sale are still living.

Propped (1992) sold for £8.25 million (£9.5 million with buyer’s fees), more than double its high estimate of £4 million, to become the most expensive work sold at auction by a living female artist. Eight bidders in total were competing for the work. To date, the record for the most expensive work at auction by a living artist is the sculpture “Balloon Dog” by Jeff Koons, which sold for £36.8 million at Christie’s in New York in November 2013. Many are even speculating that David Hockney’s Portrait of an Artist (Pool with Two Figures) (1972) could break this record when it goes to auction a month from now in Christie’s Post-War and Contemporary November sale in New York.

Propped was bought by collector and advertising giant Charles Saatchi in 1992. The work was featured in the infamous Sensation: Young British Artists from the Saatchi Collection exhibition at the Royal Academy of Arts five years later. The nude figure is Saville herself, and the writing inscribed backwards across the form is paraphrased from an essay called “When Our Lips Speak Together” written by the French feminist writer Luce Irigaray.  It reads: “If we continue to speak in this sameness, speak as men have spoken for centuries, we will fail each other. Again…words will pass through our bodies, above our heads, disappear, make us disappear…”. Emma Baker, Head of Research at Sotheby’s, explains the quote: “Women perform a narcissistic function for men. What Irigiray is positing is that female representation, female expression, should be a celebration of otherness, not a celebration of sameness.” Baker explains that Saville challenges conventional renderings of the female nude in art history by representing the female form from the perspective of a woman.

Sotheby’s describes the work as “one of the most important paintings by a British artist in the last 30 years,” explaining that, as one of the most iconic works of the YBA generation, Propped helped put London on the map for Contemporary art in the 1990s. With accolades such as these, one might conclude that the artist’s auction record wasn’t a result of good luck and the right bidders. In the Podcast, Gleadell explains that the pricing estimate for Propped (£3-4 million) was based on the results of 2014 Sotheby’s sale, when Saville’s Shift (1996-97) far surpassed its estimate of £1.5-2 million and sold for a £6.8 million (including buyer’s premium). The buyer was the Long Museum in Shanghai.

The question that comes from all of this: why do auction houses continue to literally underestimate Saville’s work? The text reads, “one of the most important paintings by a British artist in the last 30 years”, but the estimate doesn’t reflect this statement.  Given the context of the art historical importance of the work, along with the artist’s past auction prices, the record is unsurprising. Perhaps it may even be worth more than the record price. Would the price have climbed even higher with a higher estimate to begin with?

This record hopefully demonstrates to auction houses and galleries that they have much to gain and little to lose by showing confidence in the commercial value of works by female artists through their estimates. ArtTactic’s CEO, Anders Petterson, reminds us that low estimates for female artists are only part of the problem: “The record price for Jenny Saville’s painting last week is a step in the right direction. Hopefully, this will further raise the awareness of the gender imbalance that exist in the auction market. The fact that last week’s auction only had 10% of lots by female artists – show that we still have a long way to go.”

£9.5 million is quite a lot of money, but equally, so is £36.8 million. And I am still waiting for someone to say that the orange “Balloon Dog” by Jeff Koons is one of the most important works by an artist in the last 30 years.

Read more about records set at the most recent London auctions in ArtTactic’s Post-War and Contemporary Auction Analysis.