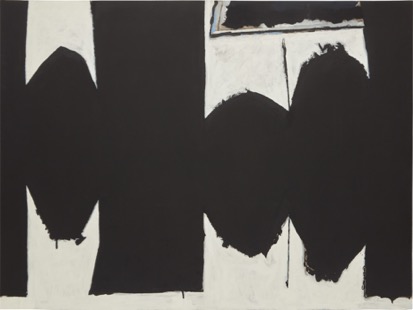 Robert Motherwell’s “At Five in the Afternoon” (1971) sold at Phillips 20th Century & Contemporary Art Evening Sale in New York on 17 May 2018 for a hammer price of $11 million. The work was from the collection of Holly Hunt. This was the second highest earning painting from the sale, followed by Jean-Michel Basquiat’s “Flexible” (1984), which sold for a hammer price of $40 million. Image courtesy of Phillips.

“New York is responsible for more than half of the entire world’s auction sales value.”

As the art market slides into the lull of late summer, ArtTactic takes stock of this year’s progress at its half way point with RawFacts Auction Review: First Half 2018. So far, 2018 is meeting the high hopes of many by demonstrating a strong increase of 22% in sales compared to the first half of 2017. All three major auction houses contributed, with Christie’s, Sotheby’s and Phillips experiencing positive growth in the last 6 months. As certain art world spectators settle down to watch the annual top-of-the-market brawl as Sotheby’s and Christie’s fight for the majority market share, they should not discount the underdog, silently gaining strength in the corner. While Phillips currently only represents about 8% of the global market, the auction house’s sales have experienced an incredible near 60% increase in sales compared to the same period last year. Phillips strategic senior hires seem to play an important part in what could only be an aggressive expansion program for 2018.

ArtTactic’s RawFacts Auction Review also reveals the geographic breakdown of the market share, which crowns New York as the number one global auction powerhouse. In the first half of 2018 the New York auction market has increased by more than 37%, meaning that it now accounts for a whopping 51% of global auction sales value. Major global art capitals, such as London and Hong Kong, are watching their slices of the market diminish as New York cleaves the pie in two and walks away with half. While this market domination is not unprecedented – New York held 45% of the market last year – this 6% increase has tipped the scales, meaning that New York is responsible for more than half of the entire world’s auction sales value.

While New York’s expansion has resulted in declines in market shares for all other major art capitals, certain cities have seen impressive growth this first half of the year. Hong Kong showed a healthy sales growth rate of nearly 15%, while the London market increased by 12% to $1.9 billion, and Paris grew slightly by 7%. Two cities in particular have distinguished themselves with spectacular performances – one spectacularly positive, the other spectacularly poor. Milan is second only to New York in its performance, showing a near 22% increase this past 6 months. In fact, it is the only city besides New York that has increased its market share in 2018. Meanwhile, Switzerland seems to only attract collectors wishing to store art, not buy it: Geneva and Zurich experienced significant decreases of 22% and 54% respectively. Despite these minor decreases, 2018 is shaping up to be an incredible year for the auction market overall.