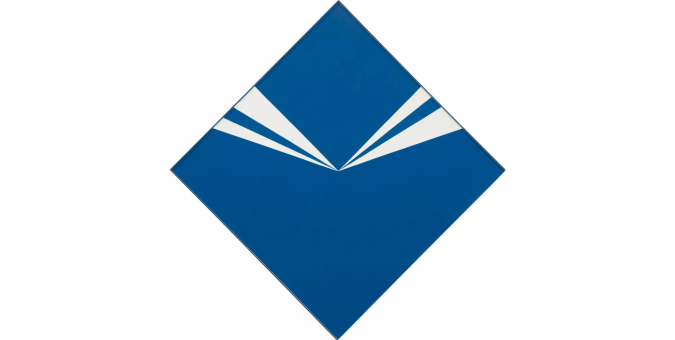 “Cerulean” (1965) by Carmen Herrera was sold by Phillips in their 20th Century and Contemporary Evening Sale in New York on 16 November of last year. Photo courtesy of Phillips.

Despite a decline in turnover in the past year, many are optimistic about the future of the Latin American market in 2018

Overall, Latin American sales across the three major auction houses are down almost 17% from last year. While 2017 started out strong, the second half of the year showed weaker performances generating less turnover. While the Latin American market’s overall performance slowed, there were quite a few highlights from this year’s sales. Notable lots include Rufino Tamayo’s Personaje en un Interior (1988) and Emiliano di Cavalcanti’s Reclining Nude with Fish and Fruit (1956), selling at Sotheby’s for $1.6 and $1.3 million (hammer price) respectively.

The cause of the nearly 17% dip in sales from 2016 could be attributed to quite a few shifts happening in the art market in general. It could be part of a larger trend of collectors relying more on independent art dealers than public auctions, it could be a matter of decreased supply, or it could be a natural market fluctuation that will even out over time. A more in-depth analysis of the Latin American market in 2017 is available in ArtTactic’s Latin American Report.

The last few months major auction houses like Christie’s and Phillips have been reorganising their sales, perhaps looking for more effective strategies to sell works by Latin American artists. Late last year, Christie’s moved part of its Latin American sales to an online auction. The effectiveness of this decision is not immediately evident, but it represents a larger trend of the growth of the online art market. A more in-depth analysis of the online market is available in the Hiscox Online Art Trade Report, with the newest edition of the report set to be released ArtTactic’s website in March of 2018.

Earlier this month, Phillips announced its decision to integrate its Latin American sale into its 20th Century and Contemporary sale. Phillips was experimenting last year with placing artists traditionally included in the Latin American sale into their Contemporary auctions, with great success. Works by Carmen Herrera performed very well, with Untitled (Orange and Black) (1956) and Cerulean (1965) selling for $1.2 million and $970,000 respectively, the former setting a new record for the Cuban artist.

Phillip’s press release stated, “In recent years, the barriers between Latin American art and the larger art market have begun to collapse. Phillips has played a large part in this process by carefully and strategically positioning important artworks by Latin American artists within the context of our 20th Century & Contemporary Art sales. This has been a result of increased demand from international collectors and we are confident our decision to fully integrate the two departments will continue to build on this momentum by making these renowned artists as accessible as possible.”

The decision to incorporate a market that many consider “emerging” into a contemporary sale not only demonstrates a large amount of confidence in works by Latin American artists, but it also represents a breaking of barriers between markets defined by region and the mainstream contemporary market. In this way, successful artists seem to be defined less by their ethnicity and more by their artistic talent. Carmen Herrera is transformed from a “successful Latin American artist” in to a “successful artist”, full stop. While there are both positive and negative aspects of organizing auctions by region, it is clear that placing a work by a Latin American artist into a contemporary sale positively affects its price.

Despite this dip in sales in 2017, many are optimistic about where the market is heading in 2018. ArtTactic’s upcoming Global Art Market Outlook 2017, set to be published next week, includes a positive analysis for the Latin American Market. While 38% of the participants in the survey predicted the market would go down in 2017, only 15% predicted it would go down in 2018. Nearly half of those surveyed predicted the market would stabilize and flatten in the next year, while 38% predicted that it would rise. With the new year comes a cautious optimism for the Latin American art market.