Art & Finance: This Year In Review

Art & Finance: This Year In Review 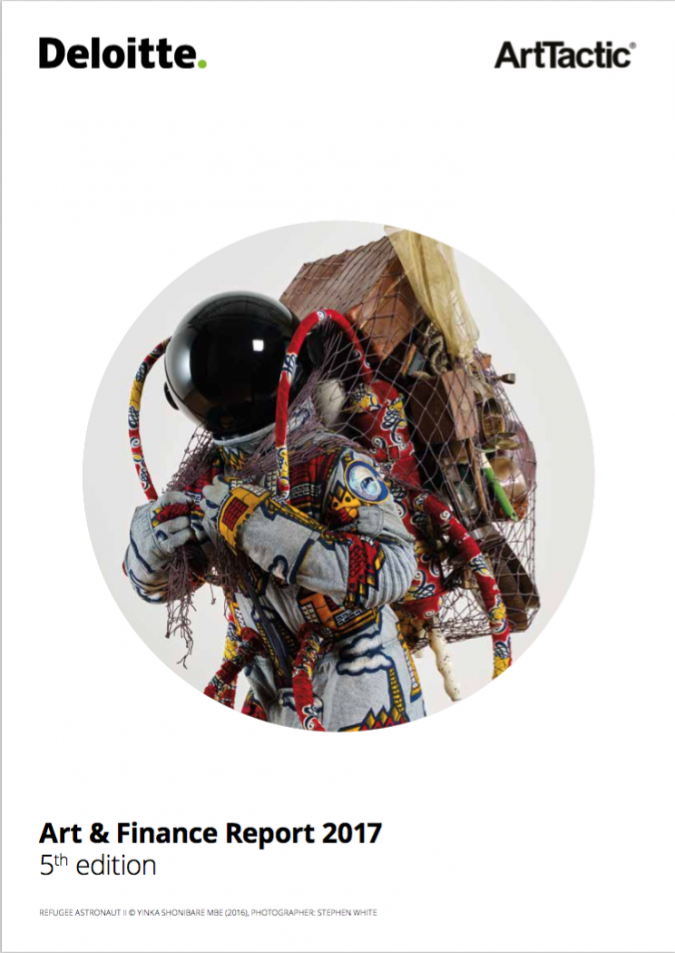 Image taken from Deloitte and ArtTactic’s Art and Finance Report, 2017. Courtesy of Deloitte.

As the art world reflects on 2017, ArtTactic looks back on some of the most important art market developments this past year, and what to expect in 2018

2017 may go down in the history books as the year that Salvator Mundi sold for $450 million at Christie’s, but plenty of other important art market developments happened this past year, even if they didn’t make the cover of the Times. Here ArtTactic identifies two key areas of progress made in the last year, in both Wealth Management and Technology, and what this progress could mean for the future. The statistical findings in this article originally appear in the Art and Finance Report 2017, which is an annual report published by Deloitte and ArtTactic, now in its fifth edition.

The 2017 Art and Finance Report revealed important findings about the status of fine art as an asset over the past year, and how private fine art collections are gaining an increasing amount of attention in the world of wealth management. In the past few years, we have seen an overall increase in the number of Ultra High Net Worth Individuals (UHNWI), defined as persons with investable assets of at least $30 million. In 2016, the UHNWI population grew by 3.5%, indicating that more and more individuals will be in need of increasingly innovative wealth management infrastructures in the future, especially regarding collectible assets, such as art. Deloitte and ArtTactic’s report predicts that the total number of UHNWI is predicted to rise 43% in the next 8 years. Moreover, it is estimated that in 2016, $1.6 trillion of UHNWI wealth was allocated to art and collectibles, and this incredibly high number is predicted to increase to an estimated $2.7 trillion in the next 8 years. The 2017 report indicates that the demand for art-related wealth management services will continue to increase in the future.

A majority of wealth managers surveyed this year already offer art-related services to their clients. However, about 44% predict that more time and energy will be dedicated to developing more refined art and wealth services for their clients in 2018. While client interest in these services appears to be increasing, many wealth managers face the challenge of a lack of internal support and interest from their colleagues. In 2016, only 26% of wealth managers cited lack of internal support, while in 2017, the numbers grew to 51%. These numbers suggest a perceived lack of leadership, expertise, and internal support for these art-related management initiatives.

Finally, 2017 has taught us the importance of including art-related wealth in wealth reporting. In May, key American political figures Jared Kushner and Ivanka Trump famously failed to report their multimillion-dollar art collection, explaining that their art was solely for decorative purposes. Of the wealth managers surveyed in the report, 69% expected their clients to want to include art and other collectible assets in their wealth reports. Including art in wealth reporting is increasingly becoming the status quo.

A second area of interest from the past year is the role that new and developing technologies have played in art world. Generally, as individuals become more comfortable with online purchases, the online art market continues to grow. The Hiscox Online Art Trade Report from 2017 reported that online art market sales reached $3.75 billion in 2016, which is up 15% from the previous year. Although online sales only account for 8.4 % of the total market share in 2016, it has shown a steady annual increase.

More traditional art businesses are identifying the need to expand their online market presence. Sotheby’s online business grew by 19% in 2016, while Christie’s grew by 34%, reaching $155 million and $217 million respectively. In a recent ArtTactic podcast, art critic and journalist Judd Tully described that online art transactions are growing, while also becoming less expensive for companies to maintain. Tully describes, “Oliver Barker (from Sotheby’s) made a comment last month during the auction that one of the lots that was sold went to an internet bidder, and that was the first time in an evening sale that a lot had been won by an internet bidder.” The traditional auction house structure seems to be adapting to allow the online platform that some bidders prefer.

New technologies are also playing a role in the evolution of the market. Art technology start-ups, also referred to as “ArtTechs” have cropped up a lot this past year, and 2018 will see an increase in businesses aiming to cater cutting edge technological innovation to the world of  art investment. ArtTactic’s Founder, Anders Petterson, stresses the importance of the report’s findings on new technologies in the art market for the upcoming year: “Technological innovation could drive a new form of art investment in 2018. The growing interest in cryptocurrencies, new crypto markets and the underlying blockchain technology, could have a profound impact on the art market and how we think about art investment in coming years. If new companies, such as Maecenas and DADA, can demonstrate sustainable success, it could open up an entire new art investment industry built on blockchain technology.”

Finally, the Art & Finance Report 2017 discusses the increasing number of data and analysis addressing risk and return in the art market, and how this will have a positive effect on transparency for buyers and investors. Petterson comments: “Since I founded ArtTactic in 2001, the adaption of data and analysis in the art market has been very slow. However, in the last five years we have seen a growing call for more transparency in the art market, and the art data [r]evolution will play an important part in this development.”

As technology continues to grow and develop, so too will its applications to the art world. Only time will tell if the art market will be able to keep up with the world of blockchain and cryptocurrencies. 2018 should give us an interesting glimpse into the art market of the future.

To read a more in-depth analysis of trends in the global auction market in 2017, read ArtTactic’s Auction Review 2017.